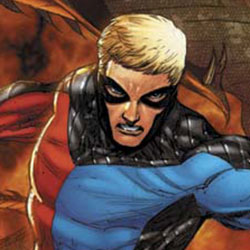 In Peter Cannon: Thunderbolt #1, Peter Cannon is a world-famous author, an international celebrity, and the superhero known as Thunderbolt.  He is acknowledged far and wide as the man who saved the world from destruction. Unfortunately, he has little interest in fame, even less interest in people, and the peace he has created is based on an illusion. Now, as old and new enemies plan to destroy his efforts-unaware of the secret he carries-Peter Cannon must fight to keep the peace and preserve his own existence, while fending off deadly foes…and mysterious admirers. Issue #1 also contains extra material – Peter Cannon’s never before published origin story by Peter Cannon creator, Pete Morisi for a total of 48 pages all for the regular price of $3.99!  This issue is soooo big, it features a foreword by Mark (Kingdom Come) Waid!

“I have a great sentimentality for all of the Silver Age heroes,” says Alex Ross.  “Peter Cannon belongs to that age of the heroic pantheon, and we have the chance to use him, and create a future for him.  This is exciting new ground for us all.” “Peter Cannon: Thunderbolt fascinates me; for one thing, he’s got the most amazingly colorful costume,” adds co-writer Steve Darnall! “More than that, however, Peter Cannon is a character with a lot of interesting facets, and I am excited to explore them in the series!”

“Peter Cannon, the original Thunderbolt, is one of my all-time favorite characters.  Having first read Crisis on Infinite Earths – a watershed series by Marv Wolfman –  with beautiful art by George Perez, seeing that glimpse of Peter made me want to find out more about this cool looking character.  Having read DC Challenge #5 with Peter Cannon, Dr. Fate, Adam Strange and others with art by Dave Gibbons, I was hooked and I sought out as many Peter Cannon comics as I could find! And when I learned that he was the archetype for Ozymandias, my love for Peter Cannon grew.  Twenty-five years later, Dynamite is publishing Peter Cannon.  We are giving Peter Cannon: Thunderbolt the respect he deserves by bringing aboard the most dynamic creative team possible,” says Dynamite Entertainment President and Publisher Nick Barrucci.  “With Alex Ross, Steve Darnall, and Jonathan Lau, as well as fantastic covers from Alex Ross, Jae Lee, John Cassaday, Stephen Segovia, and Ardian Syaf, Peter Cannon: Thunderbolt will not disappoint!” Peter Cannon: Thunderbolt is a superhero originally published by Charlton Comics, notable for containing some of the earliest respectful invocations of Eastern mysticism in American pop culture.  The character debuted in Peter Cannon: Thunderbolt #1 in January of 1966, part of Charlton Editor Dick Giordano’s “Action Heroes” superhero line.  After Charlton Comics sold its superhero properties to DC Comics in 1983, Thunderbolt reappeared after almost two decades in the Crisis on Infinite Earths crossover series (April 1985 – March 1986, Thunderbolt appearing in #6, 7, and 10) when he joined the heroes of the Multiverse in their crusade against the Anti-Monitor.  Introducing him into the new DC Universe, DC published Peter Cannon – Thunderbolt, by writer-penciler Mike Collins and inker Jose Marzan Jr.. The series ran for 12 issues from (Sept. 1992 – Aug. 1993). During the series’ run, his recurring foils were the criminal terrorists-for-hire known as Scorpio. He later discovers that his girlfriend Cairo DeFrey was actually in charge of the organization.  The character also appeared briefly with the Justice League.