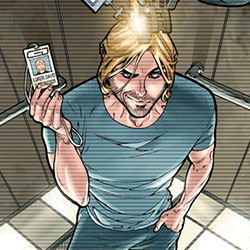 Child prodigy, inventor, genius, slacker… mass murderer. These are all ways to describe the brilliant Dr. David Loren. When a military think tank’s smartest scientist decides he can no longer stomach creating weapons of destruction, will he be able to think his way out of his dilemma or find himself subject to the machinations of smaller men?

Debuting in August, THINK TANK is a science action thriller that will appeal to fans of other hit Image series like MANHATTAN PROJECTS and THE ACTIVITY.

“Dr. Loren’s life and situation are my commentary on American so-called exceptionalism in a modern day setting with real science and weapons that you’ve never heard of that do actually exist,”  said writer Matt Hawkins. “The drones you see on TV flying in Afghanistan are decades-old technology. We marvel at these but the stuff coming out of DARPA and actual think tanks today rivals some of the most creative stuff you see in the best science fiction.” Published under Top Cow Productions’ Minotaur Press imprint, the 32-page, black and white THINK TANK #1 will be in stores on Wednesday, August 1st, 2012 for $3.99. It is available for pre-order now in the June issue of Previews (order code JUN120435).