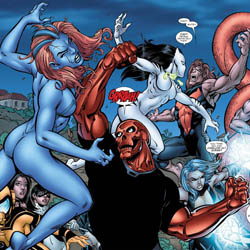 Or – “Unfortunate Implications On Parade!”

The kids of the Avengers Academy have been, essentially, imprisoned against their will to keep them from getting involved in the Avengers Vs. X-Men conflict, stuffed in a crowded area with the students from Wolverine’s school and a mass-murdering mutant madman with no memory…

Previously, in Avengers Academy:  For superheroes, the Avengers and the X-Men really don’t seem to have a lot of sense.  Anyone could have told you that two groups of superhumans stuck in a small space will fight, and throwing Sebastian Shaw into the mix, mind-wipe or no mind-wipe, was like dipping a tiger in olive olive oil and throwing it into a flaming hoop.  No matter how carefully one sets that sort of thing up, there will be blood…

As the issue opens, Sebastian Shaw escapes Avengers custody and confronts the kids of the Academy, warning them to stay out of his (and by extension harm’s) way.  It’s a super-villain moment of the old-school variety…

…completely undermined when Finesse realizes that he’s come to free his friends, the teenage X-Men.  “Was I really the kind of man who’d hurt children?” asks a bewildered Shaw, clearly not really wanting to know the answer.  That’s the great part of this issue, actually, as no one’s motivations are 100% transparent, and the people who we expect to be the heroes have motives of their own.  Hercules and Tigra have been left in charge of a couple dozen super-teens, but the kids don’t all WANT to be protected.  Several of the Generation Hope kids want to find and help their old friend Hope, while the young Avengers don’t all agree with the condescending “super-hero battles are no place for children” thought process in the first place.

Shaw’s non-heel turn is the most stunning thing in the issue, but there are a lot of unexpected moments in the issue.  X-23 and Finesse bond through their lack of empathy, Hercules is charming and loquacious, and Tigra has a stroke of brilliance that changes the whole conflict.  I am troubled by a couple of things in this issue.  First, Tom Grummett’s art makes everyone look about 10 years old, which really undermines a lot of the drama in their late-teen grappling with adult concepts.  (Tigra especially suffers, art-wise.)  Secondly, while illuminating for the characters, nothing really happens in this issue.  I would have preferred to have a little more of the Academy characters (specifically guys like the Sentinel kid, Lightspeed and others who haven’t really been established as more than familiar costumes) showing off their chops, perhaps even DOING something.  The worst part of it all comes in that, just a few months ago during Fear Itself, Hank Pym shuffled this kids off the board in the same way, leading to the implication that these teen heroes are somehow more fragile or stupid than the dozens of teenagers that came before.  Peter Parker, Kitty Pryde, Piotr Rasputin and the entire rosters of the New Mutants, New Warriors and Generation X were worthy of getting killed in combat.  Why aren’t these kids?

THE VERDICT:  WELL-DONE, BUT TROUBLING…

All in all, while it’s not a bad issue, it’s certainly not an essential one.  The characters whose title it is are side-tracked and over-whelmed by guest-stars, with core members Stryker and Mettle little more than cameoing in this issue, playing second fiddle to Hercules (which is understandable) and that naked blue girl from Generation Hope (which just flat isn’t.)  I’d rather have read an issue that was actually ABOUT these characters, rather than just happening around them, and the inappropriateness of the art to the story becomes more obvious with each page.  Avengers Academy #31 suffers most in comparison to earlier issues of the title, coming across as talky, while sidelining the characters from the story (which you’ll only find by reading AvX) earning a disappointed 2 out of 5 stars overall.