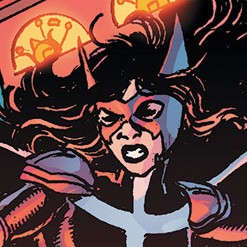 Power Girl and Huntress are just making their presence known in the DCnU proper after living there for five years. What waves are they going to make? Can they get back home? What is Helena’s last name here? Find some of the answers in the Major Spoilers review after the jump. . .

Previously in Worlds’ Finest: Robin, Batman’s daughter Helena, and Supergirl, Superman’s cousin, of Earth 2 were sent to the primary reality (Earth 1, do we have a title for this yet?) during the final battle to defeat Apokolips and Darkseid on Earth 2, shortly after seeing their respective mentors die. Now stuck in the Prime Earth (seriously, anything?) they have thrived using a combination of Bruce Wayne’s money and Supergirl’s powers. As Karen Starr, Supergirl has built a multinational corporation to try and get the girls back, but the last pieces she needs are being destroyed by Hakkou, so Powergirl and Huntress head into battle.

So the plot of the book is distinctly split between things happening now, a fight with Hakkou, and how the girls got to the place they are now. The fight itself lasts throughout the issue as Hakkou is stealing/destroying places dealing with radiation across Tokyo. We get a good idea of how these two work as Powergirl heads straight into the fight and continues to get knocked away while Huntress understands she is outgunned and keeps trying to outthink him. Huntress also shows more of her upbringing as she figures out how to track the guy and possible explanations for what he is, but also shows how protective she is of Karen by almost taking Hakkou down in one short, forcing him to flee, and waiting over Karen until she awakens. Powergirl, on the other hand, is more about punishing him for breaking her stuff and convinced that he is connected with Earth 2.
The middle of the story is dedicated to flashbacks of how the girls started their new lives one New Earth. We see Karen try to burn her Supergirl costume and taking the lack of burn capability as a sign that they are meant to come back, setting up her entire motivation in a simple scene, quite effectively too. The other five year old scene (really it’s only 58 months ago, but meh) has them discussing the differences between the two Earths, save one very significantly identical entity, Darkseid. This seems like it may be very relevant for the future of the New 52 and the multiverse in its entirety and this is a very appropriate place to drop that nugget of info, story wise. We also find out about an indestructible piece of fabric that came with them, though neither knows what it is from. From there we jump again to mere weeks ago with Karen leading a business meeting. The short sequence shows us that she has used her powers to help build her empire and that she does have at least one assistant who knows that and that knows of Helena, though not how much the assistant knows is let on.

The flashback sequences are done by a different art team than the present day sequences. I didn’t notice this until I went to put down the credits for this review, at which point I had to go back and do a comparison. After the comparison, I have to give major credit to both teams as the feel of each is quite different and very tone setting. The present is heavier with a lot more action and quite a bit darker too. In contrast, the flashback sequences are mostly lighter in tone with a softer look. The past has less going on and if feels less tense than the fighting in the present, which it should. Both teams do a great job of delivering what is needed for the story at each point, but I have to say I like the team of Maguire and Cheetham just a bit better.

Worlds’ Finest #2 has much more going on than one would catch on the first glance. From the title forward (not the apostrophe) there are subtle hints of a lot more going on. My big complaint here, I want more of the flashback story. Unless Hakkou ties into the mystery being unraveled in the flashback, I think the first issue or so could have stood as a set up to where they are now. Of course with that we wouldn’t get the great use of different art teams and the later issue may become weaker because of it. With some great segments and a large number of cliffhangers Worlds’ Finest #2 earns 3.5 out of 5 stars.