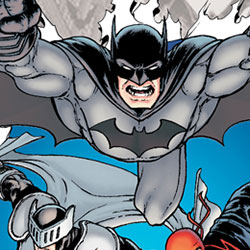 This September, DC Comics will release 0 issues for all the New 52 titles it is currently publishing, and launching four new titles as well.

#0s will be stand-alone stories. “Some issues will tell the origins of a character or a team, or in some case where an origin has already been told, they will fill in the blanks in terms of questions readers may have about the New 52 DC Universe,” said Bob Harras, DC Entertainment Editor-in-Chief. “Each of these issues promises to reveal something surprising.” TALON – Co-Writers: Scott Snyder and James Tynion IV. Artist: Guillem March.
Meet Calvin Rose, the only Talon to ever escape the grasp of the Court of Owls. This former assassin of the Court is trying to live a normal life … but that’s impossible when he’s being hunted by his former masters!

SWORD OF SORCERY – Writer: Christy Marx. Artist: Aaron Lopresti.
Featuring the return of Amethyst, Amy Winston leads a strange life on the road with her mother and resents it. She’s about to learn it’s all been necessary when she discovers she’s the lost princess of Gemworld—and she’s being hunted by her murderous aunt. With a back-up story written by Tony Bedard with art by Jesus Saiz, set in a post-apocalyptic wasteland, the monstrous warrior Beowulf is charged with finding and defeating the evil Grendel.

THE PHANTOM STRANGER – Writer: Dan DiDio. Artist: Brent Anderson.
Spinning out of his recent appearances in JUSTICE LEAGUE and DC’s Free Comic Book Day story, learn more about the true origin of The Phantom Stranger and his connection to the mysterious Pandora.

TEAM SEVEN – Writer: Justin Jordan. Artist: Jesus Merino.
Set in the early days of DC COMICS-THE NEW 52, threads of the entire DC Universe collide. As Superman emerges, so does the world’s counter measures against him and his kind. Team 7 is comprised of Dinah Lance, Amanda Waller, Steve Trevor, John Lynch, Alex Fairchild, Cole Cash and Slade Wilson — and their story will change everything you know about DC COMICS-THE NEW 52.

The last time DC Comics announced new titles, it also killed off those titles near the bottom of the sales stack.  Will this happen again, or is DC taking the New 52 in a different direction.  There’s nothing in the solicitations above that indicate these are limited or on-going series.