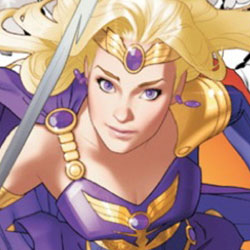 I understand many of you are fans of Amethyst, and the character is returning to the DCU in September, as the company launches four new titles on the world.  Take the jump for your first look at the character from the first issue. SWORD OF SORCERY – Writer: Christy Marx. Artist: Aaron Lopresti.
Featuring the return of Amethyst, Amy Winston leads a strange life on the road with her mother and resents it. She’s about to learn it’s all been necessary when she discovers she’s the lost princess of Gemworld—and she’s being hunted by her murderous aunt. With a back-up story written by Tony Bedard with art by Jesus Saiz, set in a post-apocalyptic wasteland, the monstrous warrior Beowulf is charged with finding and defeating the evil Grendel.

Amethyst first appeared in a special insert in Legion of Super-Heroes (vol. 2) #298 (April 1983). Her origin began shortly afterward in the twelve-issue Amethyst: Princess of Gemworld limited series in 1983, written and created by Dan Mishkin and Gary Cohn with Ernie Colón as the artist, the initial 12-issue limited series (identified by DC Comics as a “maxi-series”) establishes Gemworld, who Amethyst is, and introduces several of her villains that she will face again later. The limited series was followed by a 1984 annual and a sixteen-issue ongoing series. The ongoing series was followed by the 1986 Amethyst Special one-shot and a four-issue limited series that ended the character’s adventures (pencilled by Esteban Maroto). There was also a one-shot with Superman in DC Comics Presents #63 (Nov. 1983)

The series was oriented initially for younger female readers, but took on a more aggressive and darker tone over time. However, the character re-emerged after 18 years of sporadic appearances in 2005 during the Infinite Crisis mini-series. In June 2012 it was announced that Amethyst would make her debut in the rebooted New 52 DC universe as the main character in Sword of Sorcery.

Anyone want to take a guess on how popular this series will be? For those claiming female heroes are underrepresented, this is a good step in the right direction. Let’s just hope the sales are high enough that we aren’t seeing this series getting dumped in favor of a Jack Frost series six months from now.