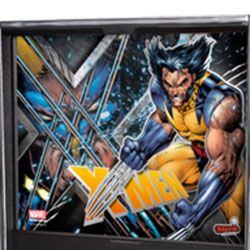 Stern Pinball, Inc., the world’s only maker of real pinball games, announced today the availability of the X-Men pinball machine based on the Marvel comic book series.The newest addition to the Stern collection celebrates X-Men, one of the most popular comic book series to date. X-Men will join Stern’s revolutionary line-up of comic inspired machines including Spiderman, Iron Man and Batman.

Since the first appearance of X-Men in 1963, the characters in the Stan Lee series have resonated with millions of comic lovers. Now X-Men fans can experience the adventure first hand with a first of its kind pinball display. In this game, players can help gather their favorite X-Men to battle and defeat their villainous enemies. The game features seven main villains including Juggernaut, The Brotherhood of Mutants, The Hellfire Club, Shadow King, Sabertooth, Sentinels and Omega Red. The machine also features a Blackbird launcher and special game modes that touch on the most exciting events in the X-Men Universe.

“Stan Lee’s compelling storytelling combined with his dynamic cast of X-Men have captured the hearts and imaginations of fans of all ages for almost 40 years,” said Gary Stern, founder, CEO and chairman of Stern Pinball. “The X-Men pinball machine celebrates Stan’s much loved series and brings fans a whole new adventure right at their fingertips.”

The X-Men game continues both the Stern Pinball and the Stern family tradition of producing quality pinball machines for young and old. The company traces its lineage to Philadelphia in the 1930s when Sam Stern entered the business of operating pinball games. Stern passed his lifelong enthusiasm for the game and the business of pinball to his son Gary Stern who founded Stern Pinball. Today pinball remains one of America’s favorite pastimes. To learn more about the X-Men pinball machine and Stern Pinball, visit www.sternpinball.com.

Stern Pinball, Inc., located just outside Chicago, Illinois, designs and manufactures arcade-quality pinball games. Stern is the only maker of full-sized, arcade quality pinball games on the planet and has released many popular games, including Tron, AC/DC, Transformers, Avatar, The Rolling Stones, Iron Man and many more. Stern’s games continue to be enjoyed by both pinball enthusiasts and casual players around the globe. For more information visit www.sternpinball.com.