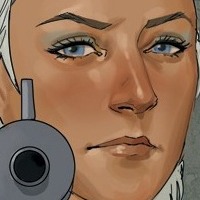 A comic book and magazine hybrid is nothing new, with most dropping out of the picture shortly after release. Will Creator-Owned Heroes be able to beat off this trend and be a viable monthly title?

Creator-Owned Heroes was a much talked about book here at Major Spoilers this week, so that has to be a good omen right? Well let’s just get into this. Creator Owned Heroes is divided into two distinct sections with the first being two original comics and the later being filled with editorials, interviews, and pretty pictures. So first up American Muscle.

American Muscle opens up appropriately with three American Muscle cars (see what they did there?) speeding across a wasteland. As one car’s breaks goes out while nearing a cliff, the group gets creative to stop the run away just in time. The rest of the issue is focused on the group figuring out what to do now that they have found their destination has been destroyed. American Muscle is an apocalyptic story that is very much self-aware and makes sure that you know this isn’t just another zombie story, which I’m not entirely convinced of yet. But overall the art and writing are well done and I’m looking forward to more.

In a cloning/growing center that is the exact opposite of the grow fields from the Matrix is where Trigger Girl 6 starts out. Once the unseen scientists let the bare-naked-lady free there are two pages of her dressing with framing that Joss Whedon would be proud of. Then without any debriefing Trigger Girl sets out on an assassination. From there it’s pretty much just some BOOM lettering as planes start blowing others planes out of the air to take out this Trigger Girl threat. Plot wise there just isn’t much there. I’m hoping that this won’t pan out to be the typical assassin grown for a distinct mission, who eventually self-realizes and fights back against her creators. But if that is what are given at least it will be nice to look at.

After the comics are over we move onto the portion of the book that is filled with articles written by more of the staff. The three editorial pieces have a thought strung out between them all: creator owned is better than company owned. Justin Gray, co-writer on Trigger Girl 6, and Steve Bunche speak louder than the others on this talking about the rebooting of franchises and legal battles between creators and the parent companies. Now whether these arguments are legitimate or not, they are going to have to find more topics to write about month in and month out.

Between these editorials were some great interviews with writer Neil Gaiman and cosplayers Juli and Alex Abene (twins Basil, twins!). Neil Gaiman’s interview gave insight into Gaiman’s career arc from his beginnings as a journalist to his work in Sandman then his work in the prose form. He spoke about his stories spilling in to the real world with his father suffering from a heart attack and then finished up with advice for aspiring writers. The “Cosplay Unzipped” interview with Juli and Alex was a great piece about the twin sisters’ interest in the art form of cosplay and how they went about designing the Trigger Girl costume that Juli models off in-issue. The interviews were a great add-in for the overall enjoyment of the book, and the pictures looked great on the iPad.

Overall Creator-Owned Heroes featured two above average comics and a few articles that had some great take-aways. Looking forward in the solicitations it seems this will continue to be for sale every moth, which should help in the viability and longevity of the title. I’m saying go grab this title. It’s worth your time and I’m giving it 3.5 out of 5 stars.