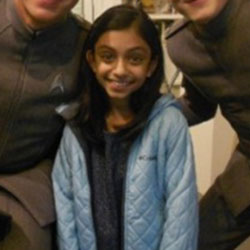 Looks like J.J. Abrams has something in mind for the new Star Trek movie, as the new costumes look a bit fascist… or socialist… or something that has “ist” in it. Brown… How the heck are we going to tell who is going to die by the end of the first act now?

One thing of note is that the hats the actors are wearing seem to resemble the cap seen in The Cage, but much more stylized. I’m open to see what Abrams has in store with this costume change, though from this behind the scenes picture it is hard to tell, especially with the lack of lens flares.