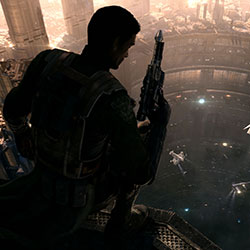 I don’t know what is going on over at LucasFilm. First it was word that Lucas was going to build low income housing on his land, then Star Wars 1313, and now Lucas is set to retire soon.  On top of all that is still the question of, “What is going on with that Star Wars television series, Star Wars: Underworld?”

In an interview with Rick McCallum, it looks like the series could be more adult than what network television could handle.

Our biggest problem is that these stories are adult. I mean…these are like Deadwood in space. It so unlike anything you’ve ever associated with George before in relation to Star Wars. These aren’t for kids. I mean, we hope they’ll watch, but it’s not being targeted at 8-to-9 year old boys. The situation we have is that each episode – or if you put two hour long episodes together – is bigger than any film we’ve ever done. It’s on the Avatar level and we’ll only have about $5-6 million we can spend on each episode.

We know that there is over 50 hours of scripts written, and there is still another year of production before shooting even begins. Lucas is loaded with money, so he should be able to absorb any cost – and I understand this is going to be a very expensive series to get off the ground – but who would pick it up? HBO? ShowTime? What about Hulu or YouTube?

Personally, I would love to see an adult-oriented Star Wars, where language wasn’t a problem, and if an occasional Twi’lek boob appeared it wouldn’t be the end of the world. Heck, at this point, I think I’d be happy if the show didn’t have a single fuzzy puppet created only to merchandise the series… but then again, it is Star Wars.