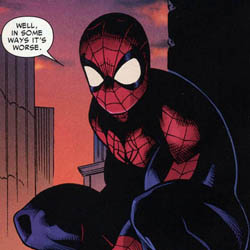 Recently, store manager Deon purchased a large lot of Spider-Man comics, including a complete run of Annuals from #1 to #21.  (Gatekeeper Hobbies, Huntoon & Gage, Topeka!  Ask me about Spider-Man’s parents!)  Marvel has once again taken up the habit of delivering double-sized Annual issues, and now it’s Pete Parker’s turn in the spotlight!

Previously, in Amazing Spider-Man:  Peter Parker was bitten by a radioactive spider, and his life was forever changed.  He fights the good fight alongside the Avengers, the FF, and pretty much anyone else, but he always regrets his failures:  The loss of his Uncle Ben to a random burglar; the death of his high school girlfriend at the hands of the Green Goblin; the failure of multiple relationships due to his life as Spider-Man.  Recently, things have been looking up for Parker, with a new job at Horizon Labs, a new world of opportunities has arisen.  But, as a wise man once told me, it’s always darkest before it gets pitch black.

Spider-Man is one of those characters who can be thrown into nearly any situation and be perfectly fine, just because of the nature and strength of his character.  This issue takes that to the extreme, putting Spidey in a world he never made (or perhaps a world that never made HIM.)  When his entertainingly named colleague Grady Scraps manages to erase him from the timestream, Peter Parker is horrified to find a world that seems to be better off without him.  Mary Jane is a successful actor, Flash Thompson an Olympic athlete, Jonah Jameson is President of the United States…  Peter discovers this information, by the way, with one swing through Times Square, where by an amazing coincidence, there are billboards announcing all these things, as well as Norman Osborn’s upcoming cure for cancer.  These revelations are, honestly, a bit ham-fisted, and Peter’s slow realization that things are better without him comes across as yet another “Hard Luck Parker” self-pity moment for me.  Things get a bit brighter the next day, but things quickly go off the rails again when a reference to Uncle Ben foreshadows too much story.  Also, I’m a bit bothered by the question of where Peter spends the missing day in the narrative, seeing as how he doesn’t exist, his ID is blank, and his home probably doesn’t exist anymore.

DID BEN PARKER EVER GET TICKED OFF AND KICK SOMETHING?

The Avengers get involved when Spidey’s temporal status starts causing earthquakes, but it’s a shame that the writer chose to use the current Avengers lineup (Captain America, Iron Man, Luke Cage and Spider-Woman) rather than an entertaining alternate-timeline version of the time.  (Maybe Giant-Man, Moon Knight, Hawkeye, The Texas Twister, Captain America and Randus?)  Things get a bit treacly when Peter realizes that visiting the sites of important past events seems to move the timestream back into whack, but the writer showed his hand too early, telegraphing the appearance of Ben Parker.  Moreover, the Avengers actually bring an elderly man along on their incredibly dangerous mission, a plot point hand-waved away by claiming that Parker wouldn’t let them leave him behind.  There really aren’t any unexpected moments in the second half of the issue, and the horrible, dangerous plot just sort of spools away into a half-resolution, leaving us with a weirdly timed Ben and Peter moment that wants to be much more touching than it comes across.  The art throughout this issue is interesting, and they do attempt a Ditko pastiche in a flashback to events just preceding Amazing Fantasy #15, but don’t change the art for the other flashbacks in the issue, which seems a bit odd.

THE VERDICT: WELL-INTENTIONED, BUT TOO SLIGHT…

All in all, the issue has no major art-problems, delivering a generic Marvel reading experience, and the plot has a strong hook but less strong execution, leading to a not-bad-but-not-particularly-exceptional reading experience for me.  The pairing of Peter and Ben is a good one (albeit one that I feel like I’ve seen more than a few times before, notably during Peter David’s last run on the character) but the use of the Avengers comes across as a plot device, and there’s an awful lot of potentially fascinating stuff that gets glossed over on the road back to status quo.  Still and all, Amazing Spider-Man Annual #39 at least has some heart to it, earning a middle-of-the-road, good-intentions-count-for-something 2.5 out of 5 stars overall.  Had the story been more consistent (or more suspenseful), this issue might have knocked it out of the park…