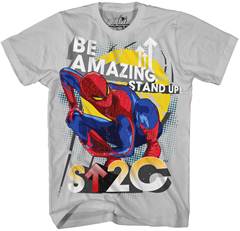 THE MERCH: Amazing Spider-Man movie art to co-brand shirts for cancer cause Stand Up To Cancer (SU2C) is proud to collaborate with the upcoming Columbia Pictures film, The Amazing Spider-Man™, for a line of special co-branded t-shirts.  Launched May 18th, and just in time for the movie’s summer debut on July 3rd, these exclusive new designs feature both the iconic The Amazing Spider-Man artwork and hero messaging encouraging everyone to take action against the disease.  The co-branded t-shirts also feature Stand Up To Cancer’s signature upward arrows logo with slogans such as, “Be Amazing, Stand Up To Cancer.” The full line of tees, in youth’s, men’s and women’s sizes, will be available for purchase online at store.standup2cancer.org/shop with proceeds benefiting SU2C.

“One of the great things about Peter Parker is he’s a regular guy from Queens who is transformed into a hero,” said Andrew Garfield, the star of The Amazing Spider-Man. “These shirts underscore the idea that anyone has the power to be a hero. Cancer is one of our greatest villains. I’m proud to join others in standing up to this disease.”
Garfield made a big stir at the 2011 Comic-Con convention when he wore a SU2C T-shirt while addressing a large group of Spider-Man fans. Pictures of Garfield went “viral” and prompted T-shirts sales and high traffic back to the SU2C site

“We’re grateful to everyone at Columbia and Marvel for enlisting this iconic superhero in the fight against cancer,” said Pam Williams, SU2C co-founder. “Part of the Spider-Man mythology is the idea that ‘with great power comes great responsibility,’ and Sony, Marvel and everyone on the film is holding up that pledge with this campaign. Our beloved co-founder Laura Ziskin, who was key to the success of both the Spider-Man franchise and SU2C, would have absolutely loved these designs and their message of empowerment.”

Laura Ziskin, the legendary film producer who executive produced the 2008 and 2010 Stand Up To Cancer telecasts, also produced three Spider-Man features, the last of which became the highest-grossing film in Sony’s history. At the time of her death in June 2011, she was at work on “The Amazing Spider-Man”. As one of the co-founders of SU2C who had cancer, she helped shape the movement, ensuring that the patient’s perspective was always front and center.

About Stand Up To Cancer
Stand Up To Cancer (SU2C)—a program of the Entertainment Industry Foundation (EIF), a 501(c)(3) charitable organization—raises funds to accelerate the pace of groundbreaking translational research that can get new therapies to patients quickly and save lives. SU2C facilitates collaboration among the best and the brightest in the cancer research community. The American Association for Cancer Research (AACR) and a Scientific Advisory Committee led by Nobel Laureate Phillip A. Sharp, Ph.D., conduct rigorous, competitive review processes through which SU2C’s grantees are selected. By galvanizing the entertainment industry, SU2C generates awareness and builds grassroots support for this new approach to ending cancer.

Members of the SU2C Executive Leadership Council include Katie Couric; the Entertainment Industry Foundation, represented by Board of Directors Chairperson Sherry Lansing (Founder of the Sherry Lansing Foundation), CEO Lisa Paulsen and Senior Vice President Kathleen Lobb; Rusty Robertson and Sue Schwartz of the Robertson Schwartz Agency; Pam Williams, partner at Laura Ziskin Productions; and nonprofit executive Ellen Ziffren. The late Laura Ziskin, a legendary film producer who executive produced the 2008 and 2010 SU2C telecasts, was also a co-founder of Stand Up To Cancer.

About The Amazing Spider-Man™
One of the world’s most popular characters is back on the big screen as a new chapter in the Spider-Man legacy is revealed in The Amazing Spider-Man™.  Focusing on an untold story that tells a different side of the Peter Parker story, the new film stars Andrew Garfield, Emma Stone, Rhys Ifans, Denis Leary, Campbell Scott, Irrfan Khan, with Martin Sheen and Sally Field.  The film is directed by Marc Webb from a screenplay written by James Vanderbilt and Alvin Sargent and Steve Kloves from a story by James Vanderbilt, based on the Marvel Comic Book by Stan Lee and Steve Ditko.  Laura Ziskin, Avi Arad, and Matt Tolmach are producing the film in association with Marvel Entertainment for Columbia Pictures, which will open in theaters everywhere in 3D on July 3, 2012.  The Amazing Spider-Man is the story of Peter Parker (Garfield), an outcast high schooler who was abandoned by his parents as a boy, leaving him to be raised by his Uncle Ben (Sheen) and Aunt May (Field).  Like most teenagers, Peter is trying to figure out who he is and how he got to be the person he is today.  Peter is also finding his way with his first high school crush, Gwen Stacy (Stone), and together, they struggle with love, commitment, and secrets.  As Peter discovers a mysterious briefcase that belonged to his father, he begins a quest to understand his parents’ disappearance – leading him directly to Oscorp and the lab of Dr. Curt Connors (Ifans), his father’s former partner.  As Spider-Man is set on a collision course with Connors’ alter-ego, The Lizard, Peter will make life-altering choices to use his powers and shape his destiny to become a hero.

via Stand Up To Cancer