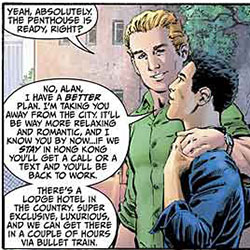 With today’s announcement that Alan Scott of Earth-2 is the new gay characters, James Robinson said other gay characters will appear in DC Comics.

“There is another character down the line, but that character won’t be appearing for some time, so it’s probably a bit too early to talk about that, but this book will definitely have a diverse cast. Alan Scott won’t be the only gay character in Earth 2, I promise you that.”

Who will it be? Does it matter?