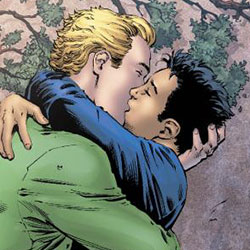 The mystery is over, DC Comics has announced that Alan Scott, the Green Lantern (and only Green Lantern) of Earth 2, is the gay character that was first hinted at at KAPOW! a few weeks ago.

Alan’s storyline is a direct result of DC COMICS-THE NEW 52 and DC’s commitment to taking a fresh look at its characters. Originally a Golden Age character whose previous continuity spanned from the 1940s through modern times, Alan was a charter member of the Justice Society. As a character, Alan is one of the oldest within DC Comics’ pantheon (being created in 1940). In EARTH 2, he is getting an update for contemporary times to reflect the world we live in. He is younger, has an updated costume and is being introduced to DC COMICS-THE NEW 52 for the very first time. It is also important to note that while Alan is a gay man, his sexuality is merely only one part of his multi-layered character.

“I’m very proud to be introducing Alan Scott into DC COMICS-THE NEW 52,” said series writer James Robinson. “He was my favorite Golden Age character and one I’m very familiar with so I’m really excited to be updating him for a contemporary readership. However, I think old-time readers will be pleasantly surprised by how, in some ways, I’m trying to show the ‘classic’ Alan Scott at the same time. He’s still the same dynamic, heroic guy he was. He’s still the head of a media empire like he was in his prior version, but of course with the form of media changing and evolving with the times. And in many ways, his origin mirrors the original one also. Oh, and on Earth 2 there is only one Green Lantern, so Alan’s title is The Green Lantern. Alan’s sexuality is just one facet of him, along with his innate goodness, valor, charisma and skill at leadership that makes him the perfect man to wield the power of the green light in the world of Earth 2.”

“Before starting work on #1, the first document I had to work from was the character breakdowns for our primary players,” continued EARTH 2 artist Nicola Scott. “With Alan the brief was very clear. He needed to be a big, strapping, handsome man that everyone would instinctively follow and love. No short order but right up my alley. Alan strikes me as an incredibly open, honest and warm man, a natural leader and absolutely the right choice to be Guardian of the Earth. His sexuality is incidental. Every time I draw him I love him even more.”