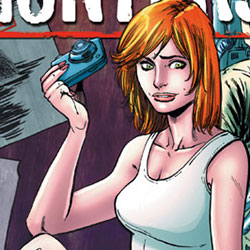 Image Comics has announced that Hoax Hunters, by Steve Seeley, Michael Moreci, and Axel Medellin, is getting an ongoing series from the publisher.

HOAX HUNTERS first appeared serially in issues of Tim Seeley’s Image series HACK/SLASH. A collection of those serials, HOAX HUNTERS #0, was published in March, and the title has been extended as an ongoing series. HOAX HUNTERS #1, which features a cover by Tim Seeley, will be in stores on July 5.

“Thanks to having an ongoing series, Mike and I have been able to expand upon the already vast world of Hoax Hunters,” said Seeley in a prepared statement. “Issue one and the arc that follows promises to be fun and epic ride.”

“Steve and I are having fun—we’re writing the comic we’d love to read,” added Moreci. “It has a little bit of humor, suspense, and brain candy. The story blends genres, histories, and folklore into something unique and unusual. If we achieve that month in and month out, we’ll feel like we’re doing our job.” Hoax Hunters #1 has a $2.99 cover price, and will be available in a digital format the same day as print.