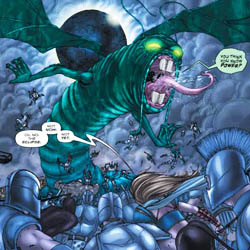 Or – “You Got Your Fairy Tale In My Funny Book!”

It has been awhile since I’ve perused a Zenescope title, but this weekend’s back issue processing included the first three issues of GFT: Alice.  Usually, I’ll peek through the books (while being careful not to damage them) before bagging and boarding, but in this case, I read the first three, and was interested to see where things ended up…

Previously, in Grimm Fairy Tales Presents -Alice In Wonderland:  Years ago, Alice Liddle fell down a rabbit hole into another world, one that was both fantastic and horrific at the same time.  All the trappings of Wonderland drove her out of her mind, leaving her daughter Calie Liddle to pick up the pieces.  The real story of what happened to Alice in that alternate world has never been told… until NOW.

LORD OF THE G-STRINGS!

Full disclosure:  I’m not a regular reader of Zenescope Comics.  There are a number of reasons for this, but the primary one comes as soon as I open the book:  the lovely shaded artwork on the cover (which is actually relatively tasteful, within the boundaries of cheesecake that one expects from Zenescope) is COMPLETELY different from what you see inside the book.  Moreover, our first page of story is a double-page spread with the TOP of the image to your left, which forces you to stop and completely reverse the normal Engligh-language reading direction.  The evil Queen of Hearts (whose word balloons are heart-shaped, which is very cute) has amassed her forces, opposed by Alice and her own army, with Alice wearing what I can only describe as the Red Sonja version of her regular blue-and-white pinafore dress.  Said dress is actually one of the other problems with the book, resembling as it does the version worn by Alice in the Disney cartoon, where the character was clearly a child, whereas here…  Not so much.  Knights clash with living playing cards in a battle tableau reminiscent of a Peter Jackson movie, and (amazingly) Alice seems to be winning!

The artist continues to play with the forms, as an extensive falling sequence during the battle causes the world to spin, even as the page remains static, leading to a portion of story wherein Alice and her world balloons are completely upside-down.  Trouble is, they again go counter to the direction that makes sense for comic book reading, with the perspective spinning in a counter-clockwise direction.  This sequence is successful in making the reading experience disorienting, though, which is nice…  Alice beheads the Queen of Hearts AND the Cheshire Cat in a cool sequence that only falls down on the sketchy quality of the art, and things continue to escalate, with all the requisite characters on display.  Alice uses some of Wonderland’s mushrooms to take a page from Hank Pym’s book and personally challenging the big bad in hand-to-hand combat.  As awesome as the sequence wants to be, the scene is completely undermined when she bursts out of her armor, but somehow manages to have her lovingly-rendered underwear grow to immense size with her.  She wins the battle, but (since this is a prequel) we know she loses the war, and the story ends with our protagonist bleeding to death on a bathroom floor, a very disheartening way to end the story…

THE VERDICT:  DARK AND DISTURBING…

When I accidentally started reading #1, I had no idea that this was a prequel story to the previous Wonderland series, nor that the character that I found myself kind of relating to was destined to die at the end.  I realize that many of the readers of this series would come in with that information, but there really wasn’t a whole lot of foreshadowing that would indicate Alice’s bad end.  If she hadn’t been put forward as a  standard protagonist, overcoming the odds against her and fighting the good fight, it might have been different, but this issue left me with a vague discontent due to its depressing Outer Limits Ending.  I wasn’t as bothered by the eye-candy factor this issue as I have been with previous Zenescope comics, but there was a moment in this story where it felt perfectly natural and story-driven for Alice to have ended up completely naked, but she didn’t.  It is as bothersome to me to have a character remain in her lingerie when it makes sense NOT to be as it is for a character to end up in her lingerie when there’s no real reason for her to BE in it.  All in all, Grimm Fairy Tales Presents Alice In Wonderland #6 finds its reach to exceed its grasp, shooting for epic tale of personal war and consequences and giving us only a fraction of that, earning 2 out of 5 stars overall.  The combination of art issues and storytelling peccadilloes overwhelm something that held the potential to be a cool revisionist fairy tale, which is too bad…