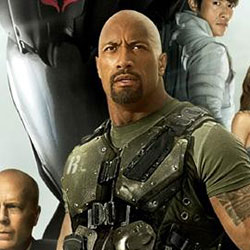 MOVIES: Duke’s death the cause for delay

Remember last week, when we learned that Paramount had yanked G.I. JOE: Retaliation from theaters?  The official reason was to do some 3D-ifying to the flick to sell it to foreign audiences.  Thanks to Deadline, we now know the real reason.

I don’t know if this is going to be a spoiler since Paramount is reshooting specific scenes, but in the version that was set to release in June 2012, featured Channing Tatum’s character, Duke, getting killed.  Those who keep track of star power (we don’t fwiw), know that Tatum is a hot commodity, and killing the character off was a big turn-off for audiences.

In our first screening of the film the reaction from audiences was good but with 2 big concerns: 1) They didn’t like the fact that Channing and The Rock really didn’t have any time to develop a friendship before Channing died, and 2) Why wasn’t it going to be in 3D? We went back and shot another week with Channing to develop more of his story with The Rock, which made the film play much better. But we didn’t have the time to be in 3D.

So, the studio is frantically reworking the movie to keep Tatum alive, and make audiences happy.   I’m not really surprised by this, as last minute shuffling raised the flag for me that this picture was in trouble.   If there are extensive reshoots, then the budget for the movie is going to skyrocket, and that is all before this magic money making 3D-ifying Kool-Aid is added to the bottom line.  Paramount is putting a lot of faith that Chinese and Russian audiences are going to flock to see this film to offshoot what Paramount says is a $130 million budget.

Add to that the advertising budget that now has to be flushed (remember that Super Bowl ad, that cost over a million bucks?), a whole new advertising campaign has to be created to rehype the movie, and hopefully diffuse audience confusion as to why the movie was yanked in the first place.  Previous discussions, and research indicate that at least $75 to $100 million will be spent on advertising, and after all the profit participation is divvied up, Paramount is going to need at least $300 million to see any money float into its accounts.

While the trailer for G.I. Joe: Retaliation looks good, and it may indeed be better than the first movie, I still wonder if the bad taste left in the mouths of audiences will result in box office dollars.