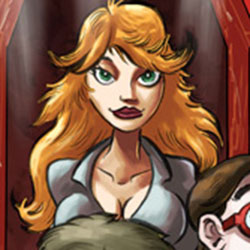 ALPHA GIRL creators Jeff Roenning and Jean-Paul Bonjour began their careers as filmmakers, and they’ve brought that love with them to their first foray into comics! Each cover for their violent and raunchy tale of Judith, possibly the world’s last sane woman, fighting her way through the lady apocalypse has been an homage to different iconic movie posters. Bonjour, who has a number of tattoos by Rassier, explained: “Jeff Rassier’s artwork is hands-down amazing. It was a treat to get him to sit in as a special guest artist on issue #4 and recreate the most iconic poster in the martial arts world — Bruce Lee’s Enter the Dragon.”

For Rassier, drawing the cover was a dream come true. “I have been a lifelong lover of comic books,” he said. “I collect comic art and put out an underground comic of my own, but to be able to do a cover for Image – of ZOMBIES – greatest job ever! It’s been fun following the creation of ALPHA GIRL; I really dig the story. I can’t wait to see more people chewed and spewed by zombie chicks.”

Bonjour continued, “When it was time to come up with cover ideas, being old movie buffs, Jeff Roenning and I both thought it would be great if we could pay homage to some of the classic movie posters of the past, with an ALPHA GIRL slant, of course. It really makes my inner Film Geek happy to see.”

“I love movies, even more than bacon,” said Roenning. “So doing classic movie posters seemed natural for the covers.”

ABOUT JEFF RASSIER
Jeff Rassier has been professionally tattooing for twenty-three years and is the co-owner of Black Heart Tattoo in San Francisco, CA. Outside of tattooing, Jeff co-created Buck Snort Comics (good luck finding that), and has designed numerous punk rock album covers, T-shirts, wine labels, and posters. Jeff has shown his fine art in numerous group and solo art shows, and continues to work in as many different mediums as he can.