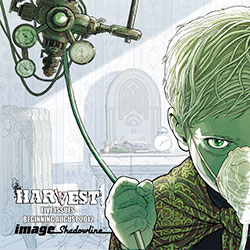 The creepy medical genre bothers the bejeebus out of me, so it should come as no surprise that Image Comics’s Shadowline imprint has announced Harvest.  Yes, it is about organ harvesting… (shudder)… remind me not to accept that drink from the cute girl in the bar…

Harvest #1 (of 5)
Story by: AJ Lieberman
Art By: Colin Lorimer
Human traffickers.  Rogue medical teams.  Yakuza run organ mills and a six year-old drug fiend.  Welcome to Dr. Benjamin Dane’s nightmare.  His only way out?  Bring down the man who set him up by reclaiming organs already placed in some very powerful people.  If Dexter, ER and 100 Bullets had a three-way and that mind blowing tryst somehow resulted in a kid, that kid would read HARVEST. Medical Grade Revenge.