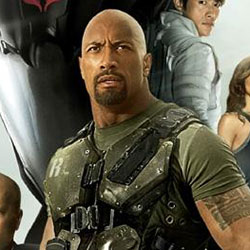 This is really surprising news – G.I. JOE: Retaliation was scheduled to arrive in theaters next month (June 29), but suddenly, Paramount has pulled the flick from the 2012 rotation and moved it to 2013.

Paramount claims it is pulling the movie to add 3D.  This is interesting because most of us already understand that taking a movie shot in 2D and giving it the 3D treatment generally sucks, but the studio is doing it anyway.  Paramount believes in the idea because “we’ve seen how it can better box office internationally.”  Well of course it will better the international box office because the studio gets to charge more for 3D flicks. The movie is getting the bump to March 29, 2013, which is another odd move, as generally movies released during that time period are expected to be under-performers or movies not expected to make a crap ton during a summer release.  Paramount has an answer to that as well claiming the success of The Hunger Games during March will repeat with G.I. Joe.  I’m not totally familiar with the target audience of The Hunger Games, but a movie that tends to lean toward the female tween, released during spring break in the U.S., seems like a different target market than G.I. JOE.

Is there something more behind the move? Certainly The Avengers continued box office success, and how it affected movies coming out weeks after may have played a part in the decision, especially with Prometheus and Brave coming out in the week’s before June 29th.

If Paramount is able to pull this off, then more power to them, and it will go a long way to change perceptions about 3D and March releases.