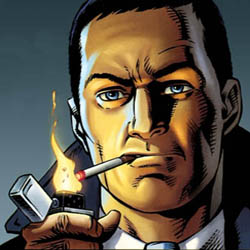 Or – “The Vicissitudes Of The Reviewing Game…”

One of the great disappointments of doing reviews for Major Spoilers comes when I anticipate a book’s release, then miss the actual review when the comic comes out.  When Secret Service was announced back in 2011, I mentally earmarked it for consumption, then totally bobbled it upon the book’s release.  Though we sold out of #1, I managed to get my hands on a copy of #2, and we can all just pretend that I never missed the other issue in the first place.  Sound like a plan?  Excellent!  Are you sitting comfortably?

Previously, in Secret Service:  Many years ago, a young Mark Millar (still then a callow youth in school) wrote a letter to his favorite comics artist, asking him to work with Mark on a project.  Given that the artist in question was Dave Gibbons, the legendary artist of 2000 A.D. and Watchmen, there was little chance that he was going to work with some punk kid.  Flash-forward to the 21st Century, as Mark Millar (now a hot commodity on the comics scene) and Dave Gibbons (now an elder statesman of the industry, credited with co-creating one of the most influential comics of all time) have come together to deliver this comic.  So, what’s all the fuss about?

IT FEELS A BIT FAMILIAR…

I have to admit, it’s a thrill seeing Dave Gibbons’ work again.  Back in ’86, when I accidentally bought a copy of Watchmen (#9, with Janie and Jon on the moon, in case you were interested) for the first time, I remember being taken with how alien his work was, while simultaneously being so realistic.  Gibbons characters have the faces of people you might know, which is why when this issue opens with a Mark Millar blood-bath, it hits so very hard.  The story has some strong chords in common with Millar’s previous work on Wanted, especially with the whole “Powerful people working behind the scenes” theme that Mark loves so much.  As we watch a mysterious mastermind murder 100 people by remote control (all of whom are participating in a group wedding on the beach, which is horrifying), I’m taken by how real the characters’ reactions feel, especially as the mastermind refuses to watch the blood-letting as it happens.  The combination of writing and art is quite fascinating to see, and I don’t think that this sequence would have been as moving in the hands of Leinil Yu or JR Jr, for example.

…BUT THEN, THINGS TAKE A TURN.

When we shift focus to London, though, the story takes a completely unexpected turn, as we meet Gary, a young shiftless layabout.  His mother is in an abusive relationship, his high school career has ended in disaster, and his uncle is… an international super-spy who wants to recruit him as protege.  It’s another familiar Millar premise, a complete loser being pulled from the sewage to a greater destiny, but it really works here (with some quiet overtones of the Wee Hughie/Billy Butcher relationship from ‘The Boys’.)  I’m taken by how real Gary’s character feels, and Uncle Jack’s casual use of James Bond gadgetry is a hoot, especially when he remarks that the budgets might not last that much longer, so they might as well use the good stuff.  Gary leaves home to go to “spy school”, where it is promised that he’ll be trained to become a combat expert, a suave man-about-town able to effortlessly blend in anywhere, and a superlative sexual partner in only 36 months.  “We’re going to spend the next six months covering the second g-spot ALONE,” remarks his trainer in a laugh out loud moment.  As the issue ends, Gary is puzzled by his spy training, while Uncle Jack is called away for an important mission in China…

THE VERDICT:  SURPRISING AND ODDLY WARM…

The most wonderful part of this issue is the quiet undertone that Uncle Jack may not actually believe his nephew to be worthy of the gig, but instead feels guilty for abandoning the family for so long, putting a new spin on the classic “Hero’s Journey.”  The wide-screen brilliance of the opening sequence, gory as it is, really gets one’s attention, and the final panel (Jack surrounded by armed Chinese soldiers, murmuring “Just give me two more seconds” as he hacks their computer network, is charming as all hell.  I love the interactions between uncle and nephew, and the glimpses of spy training are brilliant in their aversion of many of the more ridiculous James Bond tropes.  Secret Service #2 is fun and surprisingly emotionally engaging, with themes of family and growing up alongside a clever subversion of the intelligence game, earning a very strong 4 out of 5 stars overall.  It’s approachable, it’s clever, and I like where it’s going…