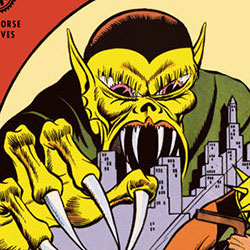 With a jaw-dropping selection of well-known titles, accurate color restoration, uncoated off-white paper, and an impressive roster of foreword writers, Dark Horse Archives is hitting another peak season this year with a lineup of pre-Code collections!

This heavy-hitting year will see more volumes in the Crime Does Not Pay Archives series, with engaging forewords from Greg Rucka and Howard Chaykin. Adventures into the Unknown Archives will feature a series of essays by Bruce Jones, focusing on the long-running horror anthology and the climate that led to the Comics Code Authority.

“The comics found in these collections are incredibly hard to find, expensive, and full of freewheeling, pre-Code fun (and sometimes viscera). It’s a joy to be able to handle these comics and work on these collections—but a bigger joy comes from being able to bring these stories to new readers and to finally assign credits to some creators who have been uncredited for decades!” said Dark Horse editor Philip Simon.

The comics in these anthologies are seen as revered and influential—but they’ve been impossible to find. Now Dark Horse is making these gems available in affordable collections for discussion, dissection, and inspiration! Adventures into the Unknown Archives Volume 1 is on sale May 30, 2012. Founded in1986 by Mike Richardson, Dark Horse Comics has proven to be a solid example of how integrity and innovation can help broaden a unique storytelling medium and establish a small, homegrown company as an industry giant. The company is known for the progressive and creator-friendly atmosphere it provides for writers and artists. In addition to publishing comics from top talent such as Frank Miller, Mike Mignola, Neil Gaiman, Brian Wood, Gerard Way, Felicia Day, Guillermo Del Toro and comics legends such as Will Eisner, Neal Adams, and Jim Steranko, Dark Horse has developed its own successful properties such as The Mask, Ghost, Timecop, and SpyBoy. Its successful line of comics and products based on popular properties includes Star Wars, Mass Effect, Buffy the Vampire Slayer, Aliens, Conan, Emily the Strange, Tim Burton’s Tragic Toys for Girls and Boys, Serenity, and Domo. Today Dark Horse Comics is the largest independent comic book publisher in the US and is recognized as one of the world’s leading publishers of both creator-owned content and licensed comics material.