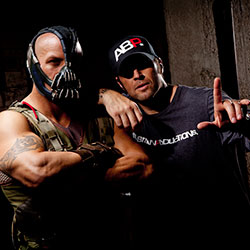 Vivid Entertainment has announced it isn’t holding back when it comes to Batman, as the Dark Knight will rise (insert snicker here) in the company’s next adult parody.

Axel Braun is once again heading the project, that according to many sites like JoBlo, Ain’t It Cool News, and even the very site you are reading, note that the director seems to really care about the parody/fan film aspect Braun is taking to these parody projects.

“I’m absolutely thrilled to see such an early positive response” says Axel, “It certainly validates the amount of passion and hard work that so many talented people have put into this project.”

“In the end, it’s all about quality,” said Steven Hirsch, CEO and co-founder of Vivid Entertainment. “Axel has fun spoofing the source material and his attitude, along with his notorious attention to detail, resonates greatly with the fans.”

Once again, Vivid is quick to point out that this is a parody movie, thus protecting them from a rain of lawsuits from Warner Bros. Legal.