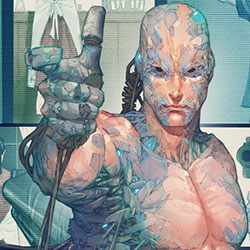 The Activity #6
“CAMOUFLAGE”
Who was Leslie before she was Fiddler? Guest artist MARC LAMING draws a flashback issue of Leslie Ryan’s days in Civil Affairs on an early geopolitical mapping mission that takes her to a dangerously isolated village west of the Congo. THE ACTIVITY continues to globetrot with a finger on the trigger at all times.

Dancer #1
“OUVERTURE”
Retired assassin Alan Fisher and his ballerina companion must escape a ruthless sniper who stalks them through the streets of Milan. To survive and protect the love of his life, Alan will unravel the tapestry of the past he’s kept hidden and discover the killer’s impossible identity. From the writer of WHO IS JAKE ELLIS? and the artist of VIKING comes a spy thriller with a 21st Century twist.

Danger Club #2
Yoshimi Onomoto returns to her homeland a fugitive as Danger Club leader Kid Vigilante and his arch-nemesis Ladybug confront their pasts in the Cave of Vengeance. Old wounds are opened again, and new mysteries arise as the world faces its imminent doom.

The Darkness #103
“THE CRACK IN EVERYTHING,” Part Three
At home, Jackie remains blissfully unaware of the rot growing under the surface of his perfect family life. But at the office, he’s painfully aware that the cold war brewing between him and the Bulgarian mafiya is about to boil over. Hot on the heels of THE DARKNESS II video game release, Top Cow proudly welcomes the new creative team of DAVID HINE (THE DARKNESS: FOUR HORSEMEN, THE BULLETPROOF COFFIN) and JEREMY HAUN (ARTIFACTS, BATTLE HYMN, Detective Comics)!

Glory #26
“DESTROYER,” Part One
The secrets of Glory’s past, present and future have all been revealed, but now those closest to her must suffer their consequences. The Extreme relaunch revolution continues with Glory fully coming into her role as the new universe’s instrument of war and nothing will stand in her way, not even her allies.

Hardcore #1
From the creative minds of Image partners Robert Kirkman & Marc Silvestri! Once the hard core is shot into the back of your neck, an assassin’s brain waves can be transmitted into your body–circumventing your brain functions–taking complete control of your body. When assassins use this technology–your killer can be anyone; your barber, your neighbor or your wife. They are the best assassins in the world–but what happens when one of their own turns against them? Who can you trust when your enemy can change his appearance as easy as someone changes a shirt?

The Manhattan Projects #3
“THE BOMB”
The Death of FDR leaves the Manhattan Projects in chaos as questions of leadership arise. The world’s first Artificial Intelligence is created 40 years ahead of schedule. And whatever happened to the THIRD atomic bomb developed by Oppenheimer and his unparalleled Science Team?

One of the most anticipated new series of the year continues in THE MANHATTAN PROJECTS #3: THE BOMB!

Mondo #2 (of 3)
What’s considered normal on Venice Beach is totally outrageous everywhere else. So when the radioactively-mutated MONDO shows battling a hoard of mutated chickens, a gang of tattooed babies and a giant monster from the ocean’s depths, all amidst the Mayor’s dredging up the beach shoreline in search of a legendary Ferris wheel, you’ve got the making of an all-out gargantuan battle the likes the balmy town has never seen before!