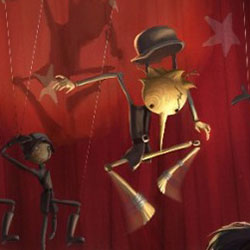 Variety is reporting that Guillermo Del Toro will co-direct his first animated feature with Mark Gustafson.  The duo will be taking on Pinocchio in a pre-WWII setting.

Several of Del Toro’s movies have taken place in and around the big world changing war, so it doesn’t come as a complete surprise that this project is set in the ’30s and ’40s.  “It was when everyone was behaving like a puppet, except for puppets,” Del Toro told the magazine.

This version is aimed at an audience 10 years and up, and a bit scarier than the Disney film.  For instance: “the Blue Fairy is really a dead girl’s spirit,” del Toro said. “Pinocchio has strange moments of lucid dreaming bordering on hallucinations, with black rabbits. The sperm whale that swallows Pinocchio was actually a giant dogfish, which allows for more classical scale and design. The animated adaptation will be a 3D stop-motion featured produced by the Jim Henson Company.

via Variety and Deadline