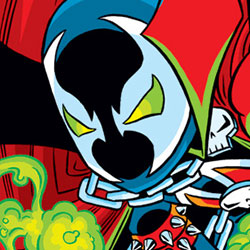 Last month, Image Comics announced that Chris Giarrusso (G-MAN) would be creating special “cute” versions of the covers of classic Image titles, the first of which was YOUNGBLOOD, issued as a special limited-run variants cover of YOUNGBLOOD #71. Now, Image is unveiling the next cover in this series, a re-creation of SPAWN #1 by Todd McFarlane.

The colorful and friendly (two adjectives not normally associated with SPAWN) Giarrusso cover is one of seven variants produced for SPAWN #220 that commemorate the series’ twentieth anniversary. The variants include two homages to classic Image series, drawn by McFarlane —“Savage Spawn,” referencing the first issue of SAVAGE DRAGON by Erik Larsen (Cover B – APR120410) and “Youngblood Spawn,” after the first issue of Rob Liefeld’s YOUNGBLOOD (Cover C – APR120411).

McFarlane returns to writing his iconic comics series with SPAWN #220, with art by Szymon Kudranski, in which twenty years of SPAWN twists and turns will begin to coalesce as Jim Downing embraces the full might of his horrific hell-born powers to piece together a mystery that has ties to the very core of the Spawn universe. SPAWN #220 will be in stores on June 6 and can be pre-ordered from the April issue of PREVIEWS. Giarrusso’s limited variant cover can be ordered with the code MAR128274.