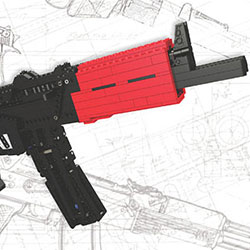 Jack Streat is an accomplished LEGO weapons builder whose YouTube videos have over 16 million views. Now he’s the author of a new book about building LEGO weapons, and he’s only 17 years old. According to No Starch Press founder Bill Pollock, “Readers will instantly recognize these models from their favorite Tarantino films and videogames like Counter-Strike and Call of Duty.” Pollock continues, “At last, LEGO fans can turn that pile of dusty bricks into insane weapons that they can brandish while running wild through their homes. The world may never be the same.”

About the Author
Since posting his first LEGO gun online at age 13, Jack Streat has played an influential role in the LEGO weapons builder community. In his spare time, he modifies guitars in a never-ending quest to make them as loud as possible. Streat is 17 years old. This is his first book.