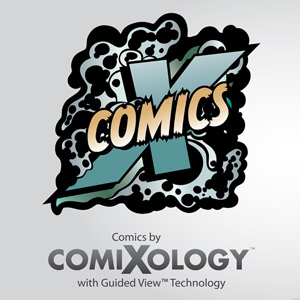 “There is no time like the present to support the Comic Book Legal Defense Fund,” said comiXology co-founder and CEO David Steinberger. “With freedom of speech being encroached upon at every corner, especially as new digital content platforms arise, comiXology is happy to show our commitment to free speech and the comics industry with this donation. If you have yet to become a member and are a comic book fan, please do so today.”

“We’re grateful that comiXology is taking this leadership position in supporting the CBLDF’s important work,” says CBLDF Executive Director Charles Brownstein. “We have already seen prosecutions resulting from comics delivered in the digital realm, and those prosecutions are still on the rise. The CBLDF maintains an active program of fighting back when those cases occur, and works hard to challenge unconstitutional laws that would restrict the rights of comics in this new environment. We’re gratified that comiXology recognizes the importance of our work in this area and are putting their financial support behind us.”

Recently, the CBLDF helped fund and guide the successful defense in R. v. Matheson, a case that involved a comic book fan who faced criminal charges in Canada relating to comic books on his computer. The total legal costs of this case exceeded $75,000. After taking the case last summer, the Comic Book Legal Defense Fund contributed $20,000 to the defense and also participated in shaping the defense, including recruiting expert testimony for the trial. The CBLDF is currently seeking funds to help pay off the $45,000 debt the defendant incurred as a result of his case, and to create new tools to prevent future cases.

To make a contribution to these important efforts, please visit www.cbldf.org.

About Comic Book Legal Defense Fund
Comic Book Legal Defense Fund is a non-profit organization dedicated to the protection of the First Amendment rights of the comics art form and its community of retailers, creators, publishers, librarians, and readers. The CBLDF provides legal referrals, representation, advice, assistance, and education in furtherance of these goals.

About comiXology
Founded in 2007 with the mission of bringing comics to people everywhere, comiXology — in just five short years — has revolutionized the comic book and graphic novel world. From creating the industry leading platform for digital comics to tools and services for brick and mortar retailers, comiXology has lead the charge in exposing new audiences to the rich history and culture of comic books. With the development of the Comics by comiXology digital comics platform — available across iPhone, iPad, Android, Kindle Fire and the Web — comiXology provides the easiest way worldwide for people to enjoy comics at just the click of a button! Regularly ranking as the top grossing iPad app in the entire iTunes App Store, Comics by comiXology was recently selected as a preloaded app on Amazon’s Kindle Fire. Providing digital comics across multiple platforms, comiXology will not stop until everyone on the face of the earth has been turned into a comic book fan.