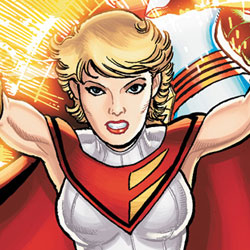 Worlds’ Finest, a series that ran for 45 years, is back. But it isn’t Superman and Batman gracing the cover, but rather Power Girl and Huntress, heroes from Earth-2 stranded on Main DCU Earth (no seriously, that’s what it’s called), looking for a way home.

Previously in Worlds’ Finest: This is the first issue, but if you’ve read Earth-2 #1, and took a gander at Mister Terrific and The Huntress (both recently canceled New 52 series), then you know that Power Girl and The Huntress are not of this world. This series picks up where The Huntress ended, and dovetails with Earth-2 #1. Confused? Good.

Helena Bertinelli is dead. No, really, the Helena of Main DCU Earth died a long time ago, so when Helena Wayne fell through the hole in the sky and wound up here, she used her skills (and a plundering of the Wayne Foundation funds) to become the mafia princess turned action hero. The events of The Huntress series, forced Huntress to abandon that identity, and as she burns her passport, Karen Starr pulls her out of her funk and into a real fire taking place at Karen’s most recent acquisition in Tokyo, Japan.

Karen’s concerns over the burning research facility soon become apparent as readers discover that the company houses a quantum tunneler – something that could be used to send the two back home. The sabotage is a mystery for sure, and when the big bad shows up at the end of the issue, it opens the door to more super happy fun-time adventures.

I wanted to like this story a lot, but unfortunately, both characters seem very flat and though their histories are fleshed out, they seem to lack a great deal of depth. There’s not much in their motivations, and the dialogue comes off as awkward in many places. This is really sad, since Paul Levitz created The Huntress, and worked on the previous series.  This should have been a slam dunk.

I like George Perez, and I like Kevin Maguire, but having both their art featured in this issue creates a weird mishmash of style that only works because the art is split in two parts. The portion of the story that takes place in the present is all Perez, and features all the wonderful, glorious things, that you love about the artist. The portion of the issue that takes place in the past is handled by Maguire. Though the idea of using different artists to illustrate a time change is a very good one, most of the time the jump turns out to be jarring, pulling me out of the story. It’s like a big neon sign constantly blinking at the reader saying, “LOOK AT WHAT WE DID! AREN’T WE SMART?” Fortunately, as the story jumps to the past, there is a nice page break to smooth the transition, but the jump back to the present doesn’t get that same treatment, and it simply doesn’t flow for me.

At some point Karen Starr’s investments in technology will get the duo home, and at that point we’ll have a nice bridge between the two Earth’s, allowing the JSA and JLA to once again team for annual adventures. But until then, I’m not sure I’m completely sold on this book. I really like strong female heroes, but for some reason, both come off more stiff than they should. The jump in the art, and the flash back sequences are more jumbled than I like, and that is somewhat disappointing. Overall, the reading experience is good, but not the knock it out of the park story I was hoping for. I’m on for the first arc of this series (though probably not print), and I’m giving Worlds’ Finest #1 3 out of 5 Stars. It’s worth picking up if you are interested to see where the jump will occur, or if The Huntress and Power Girl are two of your favorites.