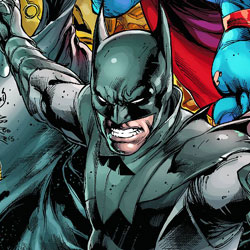 The multiverse has been back for a long time now, and even in the New 52, Earth-2 (and others) still exist. DC’s Next Wave has launched, and Earth-2 takes front and center.

Previously on Earth-2: Earth-Two first appeared in The Flash #123, and it bridged the gap between the Silver Age characters and those of the Golden Age. The Flash of Two Worlds kicked off a way for DC Comics to keep fans of the original characters happy, while creating opportunities for stories from a multitude of Earths, each a little different from the one most readers were familiar with. While 1985‘s Crisis on Infinite Earths looked to clear the slate and reboot the DCU with only one Earth, one timeline, one history, over time, cracks appeared, and those with the power (and the pen) returned the mutliverse to reality in DC’s 52. With 2011‘s Flashpoint event, fans got a chance to see an alternate timeline once again, but the most recent reboot of the DC universe (The New 52) gives us another chance to explore strange new worlds, full of heroes that are recognizable but different than our own…

There’s something epic in the way James Robinson draws the reader in with this first issue. While fans enter the book thinking they know what Earth-2 is all about, Robinson instantly changes those beliefs by giving us a look back to the events of five years ago, a time when the Parademons and Steppenwolf used Boom Tubes to attack the Earth. Robinson doesn’t need to spend a lot of time setting up the attack, we’re dropped in the middle of the fight – The Final Fight of Superman, Wonder Woman, and Batman. Batman’s figured out how to defeat the enemy, but it requires him to the ultimate sacrifice, and during the fight, both Wonder Woman and Superman are killed in battle. As each hero falls, and Supergirl and Robin (we know her as The Huntress) make their way through an open portal, the world is changed. The heroes are gone, and a very different Earth remains.

When DC fans first learned of the new Earth-2, they were teased that James Robinson would be writing a JSA series, and many were then upset over the announcement that he would be writing Earth-2 that featured Superman, Batman, and Wonder Woman on the cover. After reading this first issue, it’s clear that Robinson IS writing the JSA. During the final fight, fans are introduced to Sergeant Al Pratt (The Atom), Alan Scott (Green Lantern), and by issue’s end Jay Garrick, who will become The Flash. We aren’t seeing a story about The Trinity, we’re seeing the origins of the Justice Society of America, and it unfolds brilliantly.

THE ART OF WAR

While Earth-2 has a Teen rating, I’m glad Nicola Scott didn’t hold completely back on the big battles. Though the blood on panel is minimal, the spear that pierces Wonder Woman, and the method the Parademons take down Superman are shocking and intense. What makes these moments even more interesting from the art perspective is that Scott didn’t resort to full page panels for dramatic effect. The fact that Superman’s death is reduced to one-quarter of the page, is visually telling the reader that the heroes deaths aren’t the story – the aftermath is. It’s wonderfully done and I loved every panel.

I was very hesitant about the Next Wave, but this first issue entertained me to no end. The story is a great way to introduce the reason for the JSA, and it keeps the story set in a modern time. I was hoping to see some WWII tales, but I’m on board with what plays out here. Unlike the last time Robinson took on the JSA, I’m hoping he keeps the team roster simple, doesn’t go too far off the deep end, and delivers a tale that is interesting as this first chapter. I’m ready for issue two, and I’m giving Earth-2 4.5 out of 5 Stars.