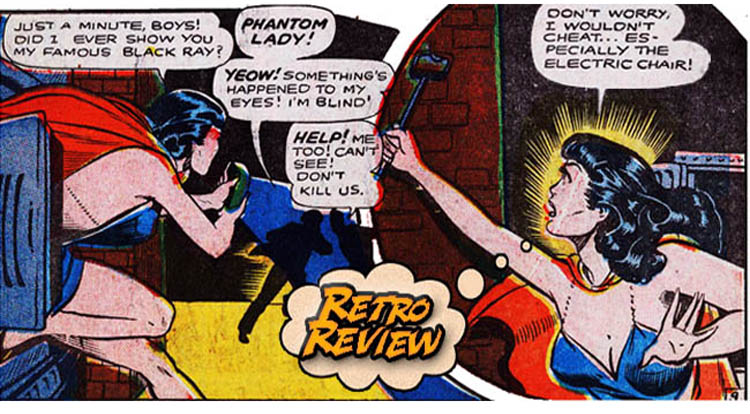 When close attention is paid to the comic books of the Golden Age, it’s clear that the publishers were working to entertain all ages and various audiences, especially at the beginning.  Certain titles were created for kids, sure, but there were comic books aimed directly at women, at teens of both genders, and (as Tom Baker reportedly said about Leela’s leather bikini) even a little something for the dads.  As with many aspects of our modern culture, though, the 1950’s were approaching, and they would pretty much ruin everything…  (Stupid Richie Cunningham.)

Previously, in Phantom Lady: When Sandra Knight decided to go into the crime-fighting business, she did so without an origin, kicked off her adventure in the same issue where Plastic Man debuted (as well as minor luminaries The Human Bomb and Firebrand) and she looked like this: It’s a remarkably modest costume, prefacing the later battle suits of Psylocke and The Scarlet Witch, and lasted her through most of her original run in Quality Comics.  When Quality Comics stopped running Phantom Lady adventures, the studio that created her stories (Iger Studios, which as Eisner/Iger studios, had also created Wonder Man) simply took the character across the road to another publisher.  When artist Matt Baker redesigned the character for Fox Features, he added a little Bettie Page, a little primary color and a rather large helping of Va-Va-Voom! If this issue’s cover looks familiar, it’s for a damn good reason, as it’s not only one of the most striking depictions of a superhero I’ve ever seen, it was part of Dr. Frederic Wertham’s withering denunciation of adult themes & sexuality in comic books, ‘Seduction Of The Innocent.’  This issue’s notoriety for that cover (along with the fact that I don’t own #13, the actual first Fox appearance of P.L.) is what led me to choose it for Retro Review treatment in the first place.  Anyway, enough fashion talk, let’s get to the adventure, as Sandra Knight sets off to meet a friend who has opened her own diner…

It’s interesting to see the 40’s era gender roles in action here, with Betty’s status as business owner seemingly being nothing unusual, even as Don snarkily remarks that he hopes she can cook.  I was also a little shocked to see the thugs slapping around a woman in panel two, but it’s a good reminder that the 1940’s weren’t a sanitized plastic world of men in hats and women in stockings.  Sandy and Don check on Betty, who has a sad tale to tell… I’m sure that many readers have never heard of Matt Baker, but this issue is a reminder of why the man is remembered as a legendary artist, even today.  Baker was a pioneer in many ways, not only as the first known African-American artist, but as one of the biggest names in Good Girl Art.  For all the half-naked comic characters I’ve seen in my life (and I have seen a lot, thankyaverramuch) the final panel of Sandra with her long skirt, fully covered, is ridiculously sexy.  When the protection thugs return to shake Betty down again, Sandra strikes the first blow with a plate… Sadly, her exit to do the quick-change to her heroic identity leaves the bad guys time to murder Betty (!!), leaving The Phantom Lady to track the bad guys down.  The story is pretty much standard issue comic noir potboiler, with Phantom Lady narrowly evading death by bazooka (!!!) and dodging bullets long enough to duck into a culvert… You can laugh about Golden Age heroes all you like, but you have to admire the fact that P.L. shakes off hand grenades in a second, but is still startled by the appearance of a rat.  Still, she doesn’t wilt from the rodent challenge, as there are murderous gangsters afoot, and a framed boyfriend back in the cafe.  And isn’t panel five awesome?

Speaking of awesome, check out Phantom Lady’s interactions with the racketeers once she finds their lair! That is HARDCORE, my friends, and not in the way that women in that particular outfit would usually be called hardcore.  Baker’s not the only amazing draftsman in this issue, though, as EC stalwart Jack Kamen takes the art in the second story, and gives Matt a run for his money… Im’ not entirely sure what in the world is up with Sandy’s ensemble there, but if I recall the movie “My Fair Lady” correctly, people used to dress to the nines to go take in the horse races…  It’s strange that this outfit would actually look nearly as superheroey as her actual super-hero costume, though.  Loser boyfriend Don (sort of a spear carrier counterpart to Lois Lane, really) has bought a stake in a racehorse, and convinces Sandra to put all her money on his nag to win.  Of course, some people have other ideas about how the race is going to go… …which is a perfectly normal thought process, right?  I mean, your jockey is murdered under mysterious circumstances, the first thing you want to do is con your girlfriend into riding in his place to protect your investment, yes? Personally, I think that Don just wanted to talk her into changing clothes so he could watch her, and reading panel one there is a small part of me that understands such thought processes.  A villainous fellow jockey finds Sandra to be a threat, and tries to stab her with a drugged spike in his crop, but ends up getting her horse instead, freeing her to leap into action in her other identity… The old joke of “she doesn’t wear a mask because nobody ever looks at her face” almost certainly has it’s origins in Phantom Lady’s adventures, as the man she attacked less then five minutes earlier on the track doesn’t recognize her face or the trademark mane of midnight tresses as she leaps to beat him down.  Unfortunately, she didn’t keep track of ALL the bad guys, and gets jumped from behind… Bad guy troubles?  Special Weapon missing?  Try the Phantom Lady method:  BURN THEM ALL!  The villains are thrown (and who wouldn’t be?) by the sudden conflagration, allowing her to mop up the villains in short form, and slip back into her dress in time to find that her four-legged friend, Sugar Girl, survived being drugged and falling at full gallop, a minor miracle in itself.  The last story in the issue is a True Crime tale narrated by a series of disembodied Phantom Lady heads, which makes for a pretty hysterical narrative (especially since they keep using the same two floating heads over and over.) But even the floating heads are wonderfully drawn, and the entire issue, though somewhat dated in terms of story and stilted in certain bits of dialogue, is a treat for me.  I love how all the standard superhero tropes are upheld with almost no variation, even though our hero is a busty ingenue instead of a barrel-chested superman.  I love how I heard about this book and the phenomenon of “headlights comics” for years before I got my hands on a copy and found it to be at once remarkably tame and amazingly attractive.  By 1948, a lot of the superhero titles had already started to go under, and the incredible artwork on display here was clearly designed to help Phantom Lady gain a broader appeal.  Phantom Lady #17 is a really beautiful example of a vintage comics, with less embarrassing content than many, and a few artistic moments that verge on utter brilliance, earning a very well-deserved 4 out of 5 stars overall.