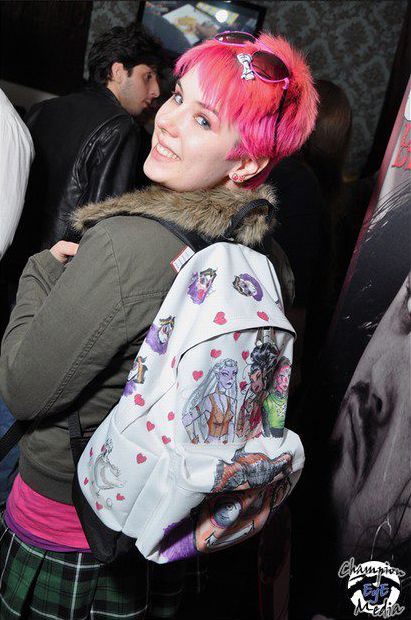 Hound Comics, Inc. (Hound Entertainment Group) made a variety of official announcements on Wednesday April 11th, 2012 at Chelsea Manor NYC during the release party for their flagship brand, “Brimstone and The Borderhounds.” William ‘Brimstone’ Kucmierowski, Hound President & CEO and Marcello Carnevali, Hound VP discussed the Corporation’s major moves and projects including worldwide, power-play partnerships. One such partnership will be with the leaders in quality luggage and backpacks, Eastsport, Inc. in order to produce a line of Brimstone and The Borderhounds branded backpacks that include the popular characters of the Borderhound franchise.

Kucmierowski proceeded to announce the partnership between Hound Entertainment, Eastsport and Guns ‘N Roses guitarist, Ron ‘Bumblefoot’ Thal concerning his new line of signature guitar cases. “We are looking to create the ultimate guitar case” says Bumblefoot. Guitar enthusiasts will be excited to know that all cases are being designed under the direct supervision of Thal. Arthur Grayer, VP of Eastsport, Inc. confirmed that both projects are currently in production and all products are looking to be released worldwide by the holiday season to be distributed via major retailers as well as availability online. Hound and Eastsport will be running an ongoing contest for the next year featuring exclusive, one of a kind, hand drawn backpacks by various Hound artists. The first of which was created by Mina Sanwald at the Great Allentown Comic Con earlier this year. Entries can be made online at http://www.Eastsport[dot]com/HoundComics – no purchase is necessary to win.