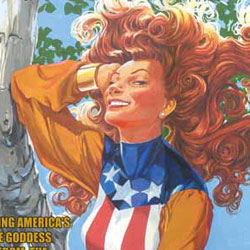 This twelve-part adventure, featuring wonderful, stylish artwork by Italy’s Francesco Gerbino began on May 1, and will run through mid-June, with new installments appearing every Tuesday and Saturday.

And after that, the entire adventure will appear in the pages of LIBERTY COMICS #6, shipping in late June, just in time for the fourth of July.

Advance orders for Liberty Comics #6 and other upcoming Heroic comic book titles can be placed on the Heroic Publishing website, at www.heroicmultiverse.com Heroic Publishing’s full-color superhero comic book titles are distributed exclusively through the online Heroic Distribution webservice. Comic book retailers interested in carrying this and other Heroic titles should register for a retail account with Heroic Distribution at www.heroicmultiverse.com/heroicdist.