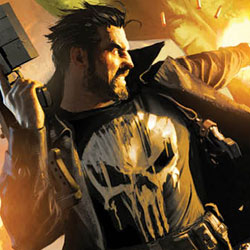 INCREDIBLE HULK #8 (MAR120594)
Written by JASON AARON
Pencils by STEVE DILLON
Cover by MICHAEL KOMARCK
Dive right into the Green Goliath’s next epic as Stay Angry erupts pushing the Incredible Hulk and his raged-induced fury to its limits! The criminally insane Bruce Banner has thrown Hulk into the middle of a murderous drug war and Hulk is forced into action; but with villainous mob of this stature- Frank Castle is never far behind! Its all-out war, as the Jade Giant faces off against The Punisher who faces off against a cartel in a brawl that no fan will forget!