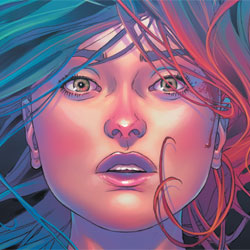 As my interest in capes and tights continues to wane, I’m drawn toward smaller publishers and their offerings. Not wanting to jump into the middle of a series, I’m looking at new series, including this week’s Mind the Gap from Image Comics.

As a parent, a husband, and friend to many, the last thing I ever want to get is a weird cryptic and potentially life threatening phone call from someone, and have no way of responding to help them. That’s how this issue opens, as Jim McCann only introduces us to Ellis Peterssen, and her predicament, through a series of phone calls made between friends and family as they rush to the hospital to find out that the central character in our story has been beaten and left on a subway platform.

Ellis, or Elle as her close friend call her, is tripping through her head as her comatose body remains in a hospital bed. I usually have very vivid dreams and if I allow any outside stimuli in (sounds mostly), the vivid dreams can really become a bizarre and scary place. That’s kind of how one feels when reading about Elle, and trying to figure out what the heck is going on. Like any good storyteller, McCann doesn’t give the readers everything they need either, as Elle’s admittance to the hospital has one doctor trying to figure out what is going on, and another doctor trying to cover things up.

The cover up continues as bit by bit, we learn that there appears to be a vast conspiracy to keep whatever happened on the subway platform from becoming known, and before the issue is over, at least one other body winds up on the pavement, and a mysterious hooded figure may be exactly who we think it is. It seems everyone we meet in this opening issue could be behind the attack on Elle.

Just when we think we have it all figured out, McCann throws one last twist that I don’t think anyone will see coming, that now has me hooked on finding out what happens next.

There’s is absolutely nothing wrong with the art in this issue. Nothing at all… well, except the shots from above can look a little skewed from what we would imagine, but not always looking down on the world that way can be forgiven. Then there is the weird feeling that what I’m really reading is an issue of Morning Glories (also by Image Comics). There’s a really good reason for this of course, Rodin Esquejo has been doing the covers for that series for a while, so the eyes staring at me from that series look exactly like those found in this issue. It’s rather unsettling at times, especially when Elle’s ghost guide reminds me a heck of a lot like Ike from Morning Glories.

BOTTOM LINE: For a good time, pick up this book

I went into this book with little to no knowledge of what to expect and that is exactly what the creators gave me here – something that seems so different from what we’ve seen before that I’m instantly hooked on the mystery, the characters, and the hook thrown in on the very last page. For $2.99, Mind the Gap #1 is certainly worth picking up, and earns 4.5 out of 5 Stars.