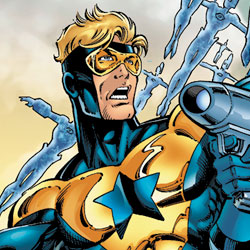 I don’t really believe this, but thought we should pass it along for your own edification. Andrew Kreisberg, writer of the Fox series Fringe, reportedly has turned in a pilot script based on DC Comics’ Booster Gold character.

Save for Smallville, live action super-hero television series haven’t fared so well.  However, considering the nature of Booster Gold’s adventures, and the fact that Kerisberg has been doing some universe hopping in Fringe, an adaptation might actually work if given the greenlight by SyFy execs.  The biggest concern is that SyFy has a pretty good record of not funding a series the way it could/should be funded and thus, even if Booster Gold does make it to the small screen, I’m giving it less than three seasons.