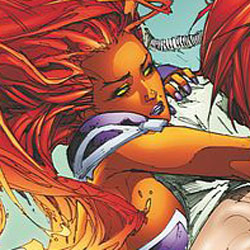 REVIEW: Red Hood and the Outlaws #8

It seems as if Jason Todd and the gang have become a little stale the past few months, but I stick with them through thick and thin.  Will #8 take a turn for the better with the Night of the Owls event?  Find out after the jump…

Previously, in Red Hood and the Outlaws:  After some Bat-like detective skills and a history lesson from Essence Jason discovers her true motives and the team successfully takes care of the problem.  Well, for the time being that is.

After having mercy on the 600 pound Suzie Su and sparing her life in Hong Kong Jason learns of his dire mistake.  After waking from her Coma Suzie calls in some thugs, takes the children’s wing of Gotham City’s Hospital hostage, and threatens to kill the kids if The Red Hood doesn’t show up in two hours.  With only 15 minutes to spare the Outlaws crash the party and prepare for a battle of whale proportions.

Red Hood and the Outlaws has maintained quite a bit of positive consistencies from issue #1.  Jason Todd is known to have a unique inner monologue and Scott Lobdell never lets up, adding an enjoyable dynamic even through the less amazing issues.  Roy Harper always has a quip locked and loaded but still provides us with a personality different from other comic reliefs and partners.  And Starfire still wears clothing appropriately representing her past and character….Yep, just wrote that.

In my younger years my mother once told me that you can become attracted to someone the more you get to know them.  This is how I feel about Rocafort’s art and Blond’s coloring.  I fresh from reading RedHood, The Lost Days when I began reading this series and I was a little sad that I wouldn’t be enjoying the style of art, but through the issues I have grown to love it.  I have no technical complaints but I can say that the style, harsh lines, and shading may not be for everyone.

Although Jason has a few titles under his belt I feel that all the flashbacks fit appropriately and are masterfully integrated into the story.  And speaking of flashbacks, Jason remembers a time he shares waffles with a familiar face from the Bat Family after eavesdropping in the Bat Channel.

As Batman grew increasingly interesting with the Night of the Owls I was ecstatic to learn that there would be an event and that Red Hood and the Outlaws would be in town for the fighty fighty.  On top of that I was extremely pleased with how smoothly our team flew into the picture.

Roy made a crack in this issue about the lack of tension, but his well placed quip didn’t quite fool me or replace the tension that I would like to keep me on the edge of my seat during the read.  Despite a lot of the good and uphill progression this issue brought it just wasn’t as “fun” as I like my Red Hood.  I’m one those who doesn’t need a good fight for an issue to good, but the fight found in the pages didn’t propel this issue past a stroll in the park.  Give me a fight or give me death!  Okay, don’t do that, but I will give you a rating.  Red Hood and the Outlaws earns 3.5 out of 5 stars this month.  If you aren’t picking this issue you up I suggest you grab the event issues if you are following Night of the Owls, but I would wait to see where the road takes us afterwards before making any life-changing decisions.