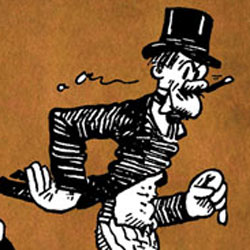 SOLICITATIONS: IDW to publish The Library of American Comics Essentials

IDW Publishing is proud to announce The Library of American Comics ESSENTIALS, a new series from its multiple Eisner Award-winning imprint that is “the gold standard for archival comic strip reprints.” Each volume of LOAC ESSENTIALS will reprint early daily newspaper strips that are essential to the history of comics presented in a novel format, 11″ wide by 4.25” high, each page containing a single daily strip.

“It’s different from our other books which generally contain two or three years of strips printed three to a page,” says LOAC Creative Director Dean Mullaney. “By reproducing the strips one per page in an oblong format, it allows us to have an experience similar to what newspaper buyers had fifty to a hundred years ago—reading the comics one day at a time.”

Every volume in the series contains a year’s worth of dailies bound in hardcover, retailing for $19.99. Each page will showcase the title given to that daily by the cartoonist, plus the weekday and date. In addition to recreating the feeling of reading sequential comics one at a time, the idea sprang in part from Harold Gray’s set of bound Little Orphan Annie proofbooks. Syndicate proofs come in differing varieties, but dailies are often bound annually, in a thick one-strip-per-page book.

“When reading a great run of dailies,” adds Associate Editor Bruce Canwell, “the proofbook format creates an irresistible urge to flip the page and see what happens in the next day’s strip.”

Another inspiration in creating these volumes was the Hyperion line of classic strips edited by Bill Blackbeard in the 1970s, which now command high prices on the collector market. “Those books were an education to many of us thirty-five years ago,” Mullaney continues. “With LOAC ESSENTIALS we take the baton from Bill so we can preserve many more classic daily strips that are essential to the history of comics.”

The series premieres in September. The first three titles are indicative of the stellar line-up to come:

Volume 1
Baron Bean by George Herriman. The first of a three-book sub-set by the creator of Krazy Kat that will reprint for the first time the complete series from 1916-1919 starring the character Gilbert Seldes called “half Micawber, half Charlie Chapin.” Edited by Dean Mullaney with an introduction by Jared Gardner. September 2012.

Volume 2
Polly and Her Pals by Cliff Sterrett. A complete year (1933) of surrealistic hilarity featuring Polly, Maw and Paw Perkins, cousin Ashur, Neewah, and the rest of the outrageous Perkins household. Edited by Dean Mullaney with an introduction by Bruce Canwell. January 2013.

Volume 3
The Gumps: The Saga of Mary Gold by Sidney Smith. In the early 1920s Sidney Smith augmented his gag-a-day style in The Gumps with suspense and soap opera continuity, creating what was arguably the most popular strip of its time. With The Saga of Mary Gold in 1928 and 1929 he cemented his reputation by creating a storyline that changed the comics forever, a saga that was called “one of the ten biggest events in comics history” by Hogan’s Alley magazine. Edited and with an introduction by Jared Gardner. March 2013.

The Library of American Comics is the world’s #1 publisher of classic newspaper comic strips, with 14 Eisner Award nominations and three wins for best book. LOAC has become “the gold standard for archival comic strip reprints…. The research and articles provide insight and context, and most importantly the glorious reproduction of the material has preserved these strips for those who knew them and offers a new gateway to adventure for those discovering them for the first time.” – Scoop