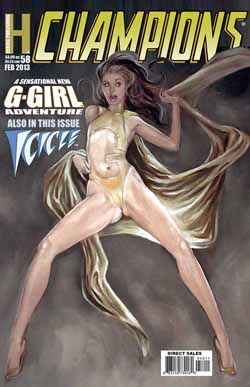 In advance of the long-awaited first issue of her own comic book, America’s newest costumed sweetheart, Billi Jayne Jensen, THE SENSATIONAL G-GIRL, makes her debut in the pages of Heroic Publishing’s flagship CHAMPIONS title.

In Champions #55, when a wrestling promoter approaches the League of Champions with the idea of putting on a championship wrestling match for charity, the League’s newest member, the sensational G-Girl, jumps at the chance to go one-on-one with one of professional wrestling’s most despised villains, the sinister Tommy “Spiderbaby” Saturday! She figures, armed with her sensational super-strength and a surprise “secret weapon,” that she’ll mop up the bad guy in the ring as easily as she’s been mopping up real-world supervillains like the abominable Ogre. But professional wrestling isn’t the real world. And the Spiderbaby has a few sinister surprises of his own in store for her. “At What Price Victory?” is brought to you by the Spiderbaby’s real-life alter-ego, writer Terrance Griep, and one of Italy’s finest new young artists, Gaetano Petrigno.

In Champions #58, we find that the G-Girl’s championship wrestling match, which was after all for charity, did nothing to help the Jensen family finances. And now, the G-Girl’s obnoxious little brother Jimmy’s latest idea on how to go about raising some spending capital is definitely going to get him in hot water with his big sister, Billi Jayne. “Candid Camera” is brought to you by the G-Girl’s creator, writer/publisher Dennis Mallonee and artist Gaetano Petrigno.

In Champions #60, while little brother Jimmy is out doing his best to raise some money, Billi Jayne and her pals Joey and Erin pay a visit to the local Soda Shoppe. But the Soda Shoppe may be a bit more than it seems. For one thing, there’s a very familiar-looking, bald, bespectacled cook working the grill. And for another, Pammy the waitress sure looks a lot like another, significatly more dangerous Pammy that Billi Jayne has met a few times before. Oh, well. No time to worry about that right now. They don’t seem to be causing any trouble, and there’s teenaged girl stuff to take care of before the weekend is over. “The Soda Shoppe” will be brought to you by the creative team of Dennis Mallonee and Gaetano Petrigno.

Finally, in Champions #62, featuring a special guest appearance by the Huntsman, Billi Jayne takes matters into her own hands, and comes up with what she thinks is a reasonable plan to deal with the Jensen family’s financial problems, at least for the time being. Problem is, bank robberies are illegal. And when a band of invisible villains tries to stage a robbery just as Billi Jayne and the Huntsman are busily negotiating terms of a cash advance with the local branch manager, she feels obliged to go into action and deal with it as the sensational G-Girl. “Assault of the Blue Men” will be brought to you once again by the creative team of Mallonee and Petrigno.

The stories appearing in these four issues of CHAMPIONS are designed to complement the G-Girl adventures that will be featured in the pages of SENSATIONAL G-GIRL. Where stories in SENSATIONAL G-GIRL will focus for the most part on superhero conflict and action, the G-Girl stories in CHAMPIONS are meant to focus on the more personal aspects of what it might mean for a teenaged girl with very little experience at being a teenaged girl to find herself suddenly acknowledged as one of the world’s foremost costumed heroines.

The adventures of Billi Jayne Jensen will begin to unfold throughout 2012 and 2013 in the pages of both CHAMPIONS and her own SENSATIONAL G-GIRL title. It’s going to be wild. And Heroic Publishing hopes you’ll be along for the ride.