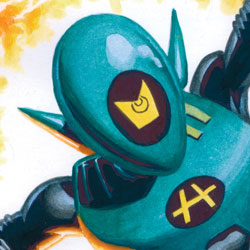 Hypergirl introduces us to the strange and unusual world of Wierdsville, a city where almost anything can happen. We meet bored teenage girl Charley Matthews who has no idea that a chance encounter with the dying Doc Hyperpower is about to change her life forever. Will she rise to the occasion and defeat the evil of Pharaonicus, or will she lock herself in her bedroom and listen to The Cure? Find out in the senses shattering debut of Weirdsville’s newest hero – Hypergirl!

“With Hypergirl we’ve tried to do something a little different,” explains co-creator, Ian Sharman. “She’s a teenage girl, but you won’t find any cheesecake in the pages of this comic, and her costume doesn’t have any convenient holes in it to show off her assets. She’s a regular girl, someone I think any reader can identify with. I think anyone, young or old, male or female, will find something to enjoy in the pages of Hypergirl.”

Hypergirl was co-created by two veritable giants of the UK indie comics scene, Ian Sharman (Alpha Gods, Hero: 9 to 5) and David Wynne (Particle Fiction), and originally appeared as part of Orang Utan Comics’ acclaimed monthly web comic, Particle Fiction. It was initially conceived as a sixteen page story, just like every other Particle Fiction story, but the tale grew in the telling, and became the 32 page Hypergirl #1, and once Markosia saw it, a 128 page collected work was soon commissioned. The hardcover includes 96 full colour story pages, plus a whole wealth of background material detailing the history of Weirdsville.

Hypergirl creators Sharman and Wynne were given a huge boost on New Year’s Day when they awoke to find that they had beaten out the likes of Justice League Dark, Takio by Brian Michael Bendis and Kirby Genesis by Kurt Busiek and Alex Ross to tie in first place with The Strange Talent of Luther Strode for the Comixology Comixologist’s Choice Award for Best Debut Comic Series, as voted for by Comixology’s twitter followers.

This signed and numbered, strictly limited edition collectible hardback edition of Hypergirl will only be available directly from Markosia, and at the Markosia and Orang Utan Comics stands at various comic conventions around the UK while stocks last. To ensure that you don’t miss out please pre-order the book for pick up at the Bristol Comic Expo and Kapow, or for delivery via UK and International mail order, from the Markosia website now. You’ll find all of the ordering details here – http://www.markosia.com/wordpress/titles/hypergirl/
Check out www.orangutancomics.co.uk for more information on Orang Utan Comics and all of our releases.