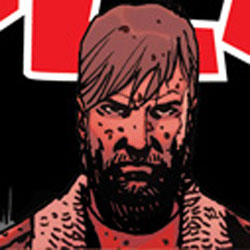 Image Comics sent Major Spoilers a sneak peek of titles arriving in stores this week.  Take the jump for an early look at the latest from Bomb Queen, The Darkness, Manhattan Projects, Near Death, Prophet, Super Dinosaur, The Walking Dead, and Witchblade.

Bomb Queen VII #3 (of 4) Queen’s World
The fanatical rise of the ShadowHawk cult is terrorizing the new era of global peace, now only the true hero behind the mask can save the world ? but ShadowHawk’s support begins to fall when Bomb Queen launches her new social network: FaceCrook.

The Darkness #102
“THE CRACK IN EVERYTHING,” Part Two
In order to maintain his happy home life, Jackie Estacado must distance himself further from the Darkness than ever before. But with a rival mob moving aggressively into his territory, will Jackie be able to maintain control of his organization without his most powerful weapon at his every beck and call? Hot on the heels of THE DARKNESS II video game release, Top Cow proudly welcomes the new creative team of DAVID HINE (THE DARKNESS: FOUR HORSEMEN, THE BULLETPROOF COFFIN) and JEREMY HAUN (ARTIFACTS, BATTLE HYMN, Detective Comics)!

The Manhattan Projects #2
“ROCKET MAN”
In this issue, we learn about the secret role that the super-scientists of THE MANHATTAN PROJECTS played in the fall of Germany during WWII. It’s the hidden history of Werner Von Braun, the rocket god of Deutschland and the only guy before 1950 to have a super-cool robot arm.

One of the most anticipated new series of the year continues THE MANHATTAN PROJECTS #2: ROCKET MAN!

Near Death #7
Markham employs unusual tactics to help extract a local teen from the clutches of a powerful street gang.

Prophet #24
John Prophet’s mission has been changed. He now has to cross the continent sized starship of Sleepingman to save a creature who has crashed onto the world below.?He must survive deadly radiation and a strangely familiar thing that’s been trapped in the ship.

Super Dinosaur #10
The dreaded Exile proves to be a far more formidable foe than Max Maximus ever was! Super Dinosaur finds himself under attack by The Exile led horde of Dino-Men! Meanwhile, Derek must infiltrate The Exile’s secret base in order to find the key to defeating him once and for all! But what about Derek’s mother? Will he ever find out she exists?

The Walking Dead #96
THE ROAD TO ISSUE ONE HUNDRED STARTS HERE AS “A LARGER WORLD” CONCLUDES!
Will Rick’s community join the network? Will they enter into an era of unprecedented peace and prosperity – or has Rick ruined that for everyone? Has he now made more, deadlier enemies for them to deal with?

Witchblade #155
“UNBALANCED PIECES”, Conclusion
Sara Pezzini only wants to repay Cain Jorgonson by rescuing him, but a mysterious cult stands firmly in her way. The new creative team of TIM SEELEY (HACK/SLASH, BLOODSTRIKE) and DIEGO BERNARD (The Man With No Name) conclude their genre bending first arc on WITCHBLADE as Sara finds herself caught between a Chicago feud much older than she ever suspected! Can Sara protect an innocent cop and save a poseur magician and bring two opposing gangs to justice?