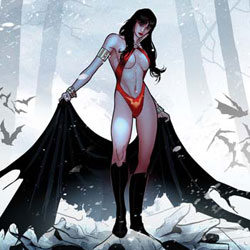 Dynamite Entertainment sent Major Spoilers a sneak peek of The Shadow #1, Red Sonja #65, Vampirella #16, and Danger Girl and the Army of Darkness #2, that arrive in stores this week.

1938: The Shadow returns in a tale of blazing action and deadly intrigue, as a night of carnage on the New York waterfront plunges the mysterious vigilante into a conspiracy involving the fate of the world itself. As storm clouds gather across the globe, American Military Intelligence meets with a certain Lamont Cranston, determined to beat a host of spies and assassins to the greatest prize of all… but what that might be, only the Shadow knows.

RED SONJA #65
32 pages FC •  $3.99  • Teen +
Written by ERIC TRAUTMANN
Art by WALTER GEOVANI
Covers by JOHN WATSON (50%), WALTER GEOVANI (50%)
Blood flows on the Stygian sands as Red Sonja — pursued by a family of Stygian assassins — closes in on her prize: an ancient weapon of incalculable destructive power. But the sorceress Azenathi has schemes of her own, and the She-Devil with a Sword may just be a pawn in a much deadlier game…Written by Eric Trautmann (Vampirella) and illustrated by Walter Geovani (Red Sonja: Blue).

DANGER GIRL AND THE ARMY OF DARKNESS #5
32 pages FC  • $3.99  •  Teen +
Written by ANDIE HARTNELL
Art by CHRIS BOLSON
Covers by PAUL RENAUD (50%), NICK BRADSHAW (50%)
“Black & White” Retailer incentive cover by NICK BRADSHAW
Abbey and Ash dig deep into the jungle to unearth a new ally.  But when Ash mistakenly – and literally – disarms their new friend, will he still agree to join them in their quest for the Necronomicon? Find out as the year’s most death-defying crossover event continues!