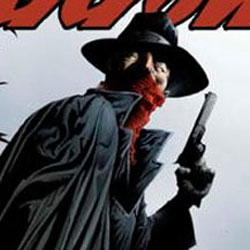 Who knows what evil lurks in the hearts of men? For decades The Shadow has known the answer, and as the character has passed through print, radio, movies, and to comic books a number of time, it’s time for Garth Ennis to take a shot at the one who can cloud men’s minds.

Previously in The Shadow: Lamont Cranston, man about town, seems to lead an idyllic life. Little do those who encounter him on day to day business know that he is really The Shadow, a crime fighter with psychic powers (and maybe more). First appearing in the pulp magazines, The Shadow has a network of operatives that aid him in his duties to abolish those that would do harm.

The first thing that springs to my mind anytime someone mentions Garth Ennis is the bloody tales the scribe spins in the pages of The Boys, Preacher, and Hellblazer. It is usually the over the top blood and guts that turn some readers off, and in the opening pages of this first issue, Ennis shows the the bloody horrors of war inflicted on the Chinese people by the Japanese in the years leading up and into the World War II. But those war crimes are also treated with respect, and though the acts are horrific, I believe Ennis’ time on books like War Stories and Battlefields prepped him to deliver a well handled opening to this series.

The Shadow knows what evil lurks in the hearts of men, and he’s tracking down two conspirators that are aiding the Japanese overseas. The action that takes place on the pier gives Ennis a chance to show off the powers the Shadow has in this series, including the ability to talk with the recently deceased. Later, readers get a glimpse at the Shadow’s ability to follow a person’s path to its ultimate conclusion, in other words, the Shadow has the ability to see the future. The moments when the Shadow appears – even when it is simply the vigilante poking his head out to say, “Boo!” are enough to make the reader feel a bit uneasy. The Shadow is a very scary character, and in the hands of Ennis, he certainly comes across as a someone you don’t want to ever cross.

Lamont Cranston on the other hand is everything that Bruce Wayne wishes he could be – an alternate personality that easily makes others believe he’s a rich playboy with connections, who helps where he can, but maintains an air of mystery over his every action and word.  I think Ennis handles Cranston well in his first appearance by not making the character a bumbling buffoon, something we’ve seen happen with this character before.

Pulp fiction and noir movies are made for one another, and the two slam head on in this book thanks in part to the Dynamite house style that utilizes heavy inks in the shadows. Though I love the color that appears on the page, I wonder what the book would look like if Aaron Campbell’s art was left in heavy black and whites. True, the Shadow’s signature red scarf wouldn’t stand out, but the lack of color would make the book even more moody than it is.

By far the best moments for the art are those that happen during the night time. The ability to limit the color palette works well in these scenes, which makes the on panel blood splatter that much more shocking as the crimson red stands out against the dark environment.

Having read Garth Ennis, I had a good idea of what to expect in this first issue, and though I wasn’t surprised on the violence front, I was completely pulled in by the character development Ennis poured into both The Shadow and Lamont Cranston. Dynamite Entertainment once again shows that you don’t have to publish super-hero comics in order to have a hit. The Shadow #1 is worth picking up, and earns 4.5 out of 5 Stars.