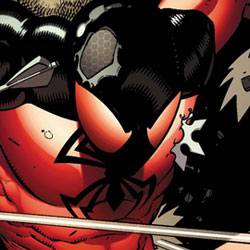 In the staff picks from last week, I claimed that Scarlet Spider is my favorite running comic. Reading 30-40 titles a month this is a bold statement to make. Does the fourth issue hold up to my expectations?

Previously, in Scarlet Spider: On his way to Mexico, Kaine stopped in Houston and rescued Aracely from a human trafficking ring. Dr. Donald Meland and Officer Wally Layton convinced him to stay and use his powers to help the community. Shortly after Dr. Meland was targeted by the Assassins Guild, who just so happen to have a few matters of the past to “discuss” with Scarlet Spider.

A flashback starts us off this month showing a homeless looking Kaine still with his scars right after he kills a mark. We soon find out that Kaine is freelancing his skills which is not cool with the Assassin’s Guild. Like much of society the guild is slightly greedy and tells him tithe to the guild and Belladonna or sacrifice his life. Kaine, like John Wayne before him, takes crap from no one and tells Belladona to perform unisexual activities or mentions something about where the sun doesn’t shine. Less than 24 hours after discovering his whereabouts the guild has not forgotten their grudge and has sent four, elite assassins to collect Belladonna’s debt. Yes, not just one impossible villain, but four! I’m not gonna lie, but it gets pretty intense and I’m pretty sure I was sweating turning each page. Luckily we were given a little breathing room we pinball between Scarlet Spider, Wally with Donald, and Aracely with Annabelle.

Meanwhile, back on the homefront…you know what, enough of the boring stuff, I’m pretty excited to move on.

When I write a review later in the week I like to browse the web to see what others are saying about a comic so I don’t just cover what’s already been done but so I can also compare and contrast topics that may need to be touched up on. I can’t really say that any of this week’s reviews on Scarlet Spider #4 were wrong or off track but I don’t feel that its justice has been served. Most reviewers rated this comic at 80-85% on appropriate scales which is fairly above average. When I read the comic on Wednesday I decided I was going to rate the issue at 4-4.5 stars, but after being rushed to read the comic I thought it wouldn’t be fair to post a rating without a more thorough read. After re-reading I decided on a different rating. I’ll tell you why next and if you agree or disagree feel free to let me know.

ACTION!  Holy wow! Like I said above Scarlet is faced against impossible odds that kept me anticipating how he we going to deal with each assassin. (Spidey Brutality of course.) You’re usually not supposed to spoil anything in a review, but I believe that the fact that this issue featured a one-shot fight affected the stars.

SUPPORT. I already love how the supporting cast is fashioning together. Donald and Wally have a unique friendship and I can’t wait to see more of them as well as Aracely and Annabelle. This is crucial to establishing a new comic run and issue #4 solidifies this aspect.

DEVELOPMENT. Another crucial aspect comes in the form of characterization. This issue not only created and completed an entire fight successfully but we also had time to observe Kaine have a moment of self reflection.

BONUS. Cliffhanger! This really was a bonus as I had already made my decision, but seriously!? I love it.

Google how many Scarlet Spider #1 reviews were written and compare it to the amount of #4 reviews. I regret to inform you that you won’t find many reviews outside of personal blogs. I’m here to tell you right now to pick up this series. I wish I would have posted this on Wednesday, but either way, pick it up. Did I mention I think you should exchange your monies for Scarlet Spider #1-4 at your local comic shop? I didn’t? Well you go do that and experience a series in which Scarlet Spider #4 earned 5 out of 5 stars.