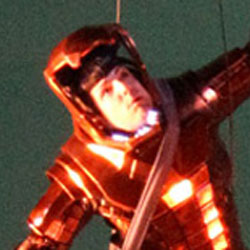 No, Spock is not visiting Taco Bell, but the latest shot from the set of Star Trek 2: Stellar Boogaloo, does feature the pointed eared Zachary Quinto sporting his variant action figure costume.

It’s been called the volcano suit, so I’m guessing Spock ventures into a hot vent somewhere in the story.

Zachary Quinto as [Spock] filming an action scene for the Untitled Star Trek 2 Sequel. After first rehearsing the scene with a [Spock] Stunt Double Actor Zachary Quinto was then rigged to a wire in front of a large green screen and lifted to a height of 10 stories high then dropped at a high rate of speed as if he was falling. In the scene [Spock] is wearing a “Volcano Suit” and carrying an unknown piece of equipment with the Starfleet Emblem. A Volcano is somehow involved in this scene. The crew had a real fire burning off camera to catch the fire reflections on [Spock]’s “Volcano Suit”.