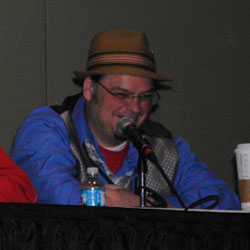 Major Spoilers reporter, Jimmy is at C2E2 this weekend, and filed a report of his activities on Saturday.

Saturday at C2E2 was far busier than Friday, with a continuation of the prolilferation of children, with some parents not realizing that walking slowly with double strollers is a MAJOR con-etiquette faux-pas. I was very grateful for the expansion of the showfloor compared to last year’s convention, as even with the dense crowds traversing the floor was never impossible as long as you paid attention to traffic and took the right routes.

The food selection at the convention was also expanded from last year, with everything from hot dogs and hamburgers to churros, ice cream and paninis. The panels were also quite enjoyable; I attended the DC “The New 52” panel as well as the DC All-Access: Before Watchmen Edition panel, and a live recording of the Aw Yeah Podcast with Art and Franco of Tiny Titans fame.

The staffers at the convention did a great job handling the increased traffic, routing length signing lines in ways that didn’t cut off the flow of people through the artists alley. Being a staffer at a convention is a largely thankless job, but the volunteers at C2E2 have been a very positive aspect of the convention.

I took some time to go shopping today in an attempt to fill in some holes in some full runs I’m assembling, and there were plenty of good vendors present; I picked up a bunch of issues from some quarter bins as well as some dollar bins, and pulled Irredeemable Antman and Arkham Asylum: A Serious House on a Serious Earth from a $5 trade bin. Overall the experience at C2E2 has been a wholly positive one.

Now, for the big interview news from today;
I spoke briefly with DC Co-Publisher Dan Didio about the work DC is doing with Earth Two and the multiverse, as the buzz-word at C2E2 seems to be “world-building.” When asked about how they planned to expand beyond a second Earth, Didio informed me that “Grant Morrison is mapping out the multiverse for us,” which seems to be a confirmation that the inclusion of President Superman in an upcoming Action Comics will be a stepping stone to the Multiversity project that’s been hinted at over the years. In light of the upcoming Before Watchmen I asked Didio whether the Watchmen characters were a part of the multiverse as they were pre-relaunch (Earth-Four was generally considered to be the home of the Watchmen characters post-52), and he revealed that Before Watchmen and Watchmen are NOT a part of the newly relaunched multiverse.

Didio was carrying around some pages from next month’s Earth Two #1, and while he good-naturedly refused to show it to me given the press badge around my neck, he apparently didn’t notice that my photographer wife had one as well and let her and my friend Pirate Steve look at it. There wasn’t anything major that hasn’t already been released from DC, but it was pretty neat that Dan Didio was roaming the show floor with pages from Earth Two in his hands.