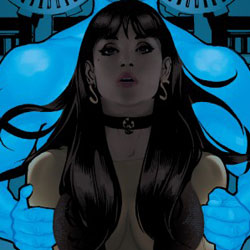 If you were wondering what DC had in store for the Before Watchmen series, the company discussed it this weekend at C2E2 in Chicago.  Major Spoilers reporter Jimmy was on the scene and filed this report.

Dan Didio led off the discussion, talking about the decision to create Before Watchmen, using the onset of baseball season to frame an analogy that “you don’t leave your best characters on the bench when you want to win a game,” promising that the Watchmen characters have plenty of stories left in them. He went on to mention that they knew the only way they could do this and do it right is if they had the right creators on the books, and that everyone on the panel was on the top of his wishlist for the project.

At this point Didio called for a fan who was at least “mildly skeptical” of Before Watchmen to come forward, and handed them a copy of the “Green Book” for Before Watchmen that they’d taken around to retailers. The green book had preview pages and covers of the stories, and was used to convince retailers that Before Watchmen was something they’d want to stock on their shelves. After several other discussions things came back around to the reader who’d had enough time to flip through it, and he admitted that his skepticism was gone now.

In the meantime, conversation turned to a book by book breakdown of the series.

Nite Owl
J. Michael Straczynski described the title as Nite Owl’s origin and what led him to get enough money and the motivation to become Nite Owl. It will follow him from early childhood through his partnership with Rorshach, and how and why that ended poorly. Apparently at the meeting the writers had they went through the plot points of Watchmen, using the Alan Moore / Dave Gibbons graphic novel like their Bible.

Later on in the panel JMS called out Alan Moore for his protests of the Before Watchmen event, admitting that Moore is a genius, but that his criticism of Before Watchmen is hypocritical in that he’s been using characters like the Invisible Man and Peter Pan for The League of Extraordinary Gentlemen for years; his specific example was how Robert Louis Stevenson probably wouldn’t have approved of Mr. Hyde anally raping the Invisible Man to death, so Alan Moore really doesn’t have the moral high ground on this one.

Minutemen
Dan Didio described Darwyn Cooke as the perfect person for this title, comparing the way the book will deal with the evolution of characters over time to the work Cooke did in Justice League: The New Frontier.

At this point in the panel, Joe Kubert came in and was asked to describe what it was like working with his son Andy on Nite Owl, describing it as both a blessing and difficult, since unlike most pencilers who understand that when they pass their work off to the inker, the inker will interpret what they’ve drawn; working with Andy, every time he inked something differently from how Andy had drawn it he could see the frustration on his son’s face.

Ozymandias
Len Wein described Ozymandias as the “spine of the entire story” with the discovery of the whys and wherefores of why he did what he did in Watchmen a big thrill when writing.

Comedian
Brian Azzarello followed up Wein’s comment about Ozymandias being the spine with a claim that the “Eddie is the balls of the entire story.” Azzarello’s Comedian will be taking place mostly in the 60s, with artist J.G. Jones bringing a “Mad Men” vibe to the book.

Dr. Manhattan
Adam Hughes started out his discussion of his work on Dr. Manhattan by admitting that he expected to get asked to do Silk Spectre, and that he really really wanted to draw Nite Owl (at which point he shot a good-natured look at Joe Kubert), but when they slipped him a piece of paper with Dr. Manhattan’s name on it, he thought he’d been punk’d. During Q&A, the question inevitably came up of whether Adam Hughes had drawn Dr. Manattan’s manhood. Hughes seemed a bit embarrassed, and mentioned that as an artist sometimes you have days where you draw faces really well, so you go through and draw faces on all your pages, and that while doing Dr. Manhattan he had a lot of really good “pants days.” He did admit, with some hesitation, that he eventually got to the point where he needed to draw Dr. Manhattan’s penis he took the “Hemingway approach” to the task and got really liquored up first, and joked that it was like an experimental phase in college where you just had to embrace it. To summarize his thoughts on the matter Hughes said “We have to be true to the source material, and that means sex, violence and penises galore.”

Silk Spectre
Amanda Conner described Silk Spectre as being completely different from all the other Before Watchmen books, and that it was “like a romance comic but with beatings.” She also mentioned trying to make it blend seamlessly with the original, and that she’s sticking with the nine panel grid and throwing in a lot of easter eggs.

Crimson Corsair
Len Wein discussed the difficulties of writing a story that would be contained in short bursts in every single issue of the 35-issue Before Watchmen event, complaining about how hard it is to write 35 cliffhangers.

Q&A
To one fan’s question about why they should be interested in Before Watchmen when we already know what ultimately happens to the characters, the panel response (which I believe was from JMS, though I admittedly forgot to cite the quote in my notes) was that “The journey of Rocky is usually more interesting than the fight.”

Dan Didio assured everyone that each mini-series could be read by itself to get a complete story.

In response to a fan question about whether his favorite character from Watchmen, Richard Nixon, would be in Before Watchmen, Lee Bermejo assured him that he’d drawn him into Rorschach.