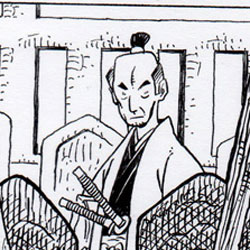 Dark Horse Comics is proud to announce a historical comic adaptation of the tale of the 47 ronin: A story of loyalty, sacrifice, persistence, and honor.

Written by Dark Horse president Mike Richardson and drawn by multiple Eisner Award winner Stan Sakai, 47 Ronin tells the tale of a daimyo (feudal lord) who was forced to commit seppuku (ritual suicide) and his samurai-turned-ronin who avenged his wrongful death.

“I’ve been fascinated with this story from the earliest days of Dark Horse, visiting the significant locations and doing research during my trips to Japan. For years I’ve been looking for just the right artist and it finally dawned on me that he was right here at Dark Horse,” said Mike Richardson. “Stan Sakai is a master storyteller who knows the material, and his artistic interpretation is perfect for the story. What’s more, my friend, legendary manga writer Kazuo Koike (Lone Wolf and Cub), has served as editorial consultant for the project.”

47 Ronin marks the first time Stan Sakai has collaborated extensively with another writer. He promises stylized artwork in the vein of traditional Japanese woodblock prints—one of the most popular depictions of the 47 ronin.

“I have known the 47 Ronin story about all my life, and I paid a pilgrimage to their gravesite when I was in Japan in 2009. This is a significant event in Japanese history, and when Mike asked me to illustrate the story I jumped at the chance. I’m known for the research I do, but I was amazed at the research and knowledge Mike already had. I’m having a blast with this,” said Stan Sakai.

47 Ronin will be on comic stands November 2012. Watch solicitations for more details!