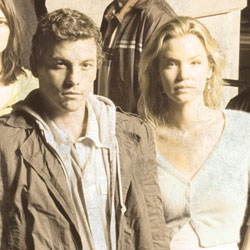 IDW Publishing is pleased to announce another series of Jericho comics hitting shelves this summer! The fan-favorite returns with a story picking up after the events of Jericho: Season Three. Overseen by the original television series’ writing staff and written by Kalinda Vazquez with art by Andrew Currie and covers by Tim Bradstreet, this five-issue series will be an absolutely essential piece of Jericho’s sprawling post-apocalyptic story.

“The greatest fans in the world came out strong for Jericho Season Three: Civil War and we are so thrilled to announce another installment of the comic book series,” said Dan Shotz, Executive Producer of Jericho. “Jake and Hawkins have finally come home to Jericho and we want to personally thank those fans and IDW for allowing that to happen.”

“Working so closely with the creators of the TV show has been a blast, their love of the material is contagious, and one of the reasons I think fans relate to it so fervently,” said Senior Editor Scott Dunbier.

Jericho’s engrossing plot and rabid fan base have kept the show alive in different forms, seemingly against all odds. For long-time fans of the television series, or those discovering it for the first time, the enduring tale of survival against a backdrop of compelling suspense has proven to be an engrossing experience that’s not to be missed!