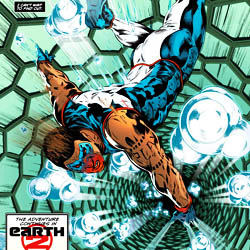 Or – “Another DCU Ending…  But Not Quite The Same Story.”

Last week brought us the final issue of Static Shock, an issue which left Virgil’s ultimate fate up in the air.  This issue wraps up Mister Terrific’s run as a solo character, but the way that it ends for Michael Holt is somewhat different…

Previously, in Mister Terrific:  One of the smartest men in the world, Michael Holt has perfected technology that allows him complete control of devices known as “t-spheres,” as well as a high-tech uniform with which he combats injustice.  Mister Terrific has made himself a name as a protector of Los Angeles, but his greatest challenge is still ahead…

AND NOW, THEY FIGHT!

The issue opens with a familiar moment for any reader of Iron Man (or of mid-70’s Batman), as the Holt Industries board of directors is in the middle of an important meeting on something or other when a super-villain attacks!  It’s kind of the weakness of characters in a corporate background that it always seems to boil down to a battle for their workplace, which I’m pretty sure has some sort of anti-trust implications.  (Iron Man is the most unethical businessman in the history of all unethical businessmen, but that’s another story…)  I believe that the villain in question is Donald, one of Mr. T’s employees, angry at being overlooked for promotion in a previous issue, but he quickly transforms into a robotic/electronic form and declares himself to be “DIGITUS!”  It’s a great name, so much so that Mister Terrific even comments on it’s melliflousity before setting in to kick his butt.  The Digitus battle is pretty by-the-numbers, as the computer villain controls Holt Industries security systems and even the T-spheres themselves before getting taken out by the A.I. at the core of Michael Holt’s computer systems.  This fight feels like it’s been compressed a bit (which seems at least likely due to the cancellation of the book), and we then immediately switch gears to another plotline…

KAREN STARR, WHERE HAVE YOU GONE?

The Blackhawks arrive seconds after Digitus is defeated, and demand that Terrific turn over the T-spheres, as they are “dangerous technology” and must be controlled.  The illegality of this is quickly brought to light, as the TV news anchor who has been recurring in the title shows up with a camera, which (as cameras always do) is feeding live to everyone in the world and on the internet.  The Blackhawks (who also, I believe, got their book cancelled) are ordered to stand down, and we then transition to ANOTHER plot…  Mister Terrific discovers that his on-again/off-again girlfriend Karen Starr had broken into his computer systems and somehow used his own systems to create a reality vortex and…  Man, there’s a lot stuffed into this issue.  We don’t necessarily get a whole lot of perspective on Mister Terrific (although we get a recap of his origins and earliest adventure, a two-page sequence that almost constitutes a fifth plot), and the issue ends with him creating a tunnel that will lead him somewhere, perhaps another dimension…  The issue ends with the kind of exciting news that Mister Terrific’s adventures will continue in the upcoming ‘Earth-2’ series.

While Static’s last ish was a pretty good standalone issue (and a not-bad issue #1, in many ways) this book suffers from ‘everything but the kitchen sink’ syndrome, as the writer clearly had a lot of things that he wanted to get in before transitioning Mister Terrific into the world of the Justice Society.  The art feels somehow rushed throughout the issue, with a lot of squash-and-stretch anatomy and some really puzzling images of Mister Terrific’s t-mask, and even the upbeat ending (which does have me looking forward to Earth-2) doesn’t overcome the challenges laid upon the story’s underpinnings by asking it to bear far too much weight.  Mister Terrific #8 is hampered by having too much story to tell and not enough pages to do it in, earning a mixed-but-primarily-positive 2 out of 5 stars overall.